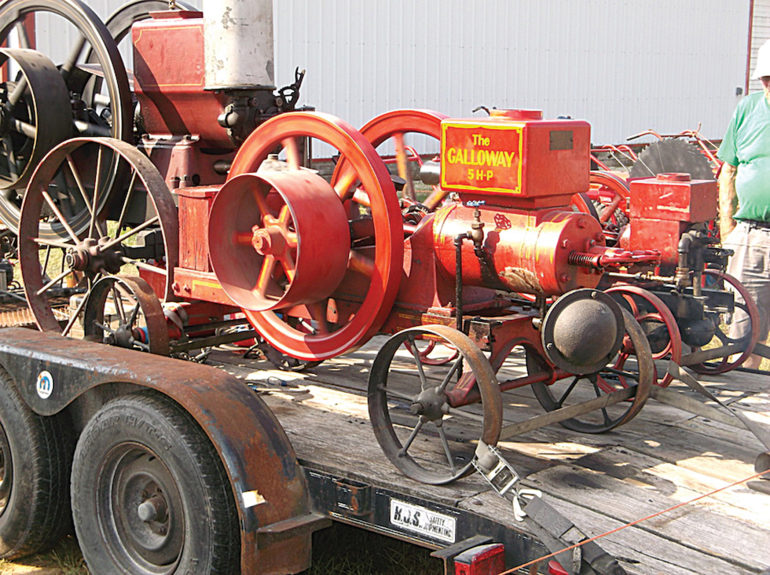 Living in Illinois has taken some adjustment, since arriving here from the wilds of New Jersey as a 14-year-old kid in the summer of 1970. My first impression of the prairie state, other than the suffocating summer heat and humidity, was how many folks attempted to slot me into the local version of Burke’s Peerage. “Are you related to the Beardstown Jamisons?” My answer: no. “Do you know John Jamison?” Again, my answer was negative. Sometimes my questioners would throw in other family names, and my answer was always the same.

Since my parents passed away some years ago and my siblings all live in other places, to my knowledge, I have no known living close relatives within 230 miles of Jacksonville. In the nearly fifty years I have lived here, my lack of local relations has been a source of consternation to some people in town, they find it hard to place me in their established framework of things.

I have a love of gadgets, especially antique gadgets, with steam boilers, flywheels, leather belt-driven whirlygigs and the like. Naturally, I’m drawn each September to the Prairie Land Steam Show in South Jacksonville, where steam tractors, sputtering stationary one-cylinder gasoline engines, the smell of coal smoke, along with the occasional steam whistle, help to satiate my gadget-craving for another year. When I first went to the steam show as a teenager, I became acquainted with steam tractors for the first time. Before then, my idea of a steam engine was confined to steam locomotives on antique railroads. It never occurred to me that steam technology could be adapted to tractors for agriculture. On trips to the steam show, I saw for the first time an operating sawmill powered by a steam tractor transferring power to the huge sawblade, via a huge leather belt. Forget the railroads, this was gadgets on steroids, and I was smitten.

Three years ago, while I was walking through the small engine display, I came across a beautiful red five horsepower stationary “hit and miss” gasoline engine. Emblazoned on the housing over the one cylinder, in yellow-gold lettering was the label, “The Galloway 5 HP.” I then remembered my mother telling me about the William Galloway Company of Waterloo, Iowa. My mother’s maiden name was Galloway. “They invented the cream separator,” she used to say, with family pride. Apparently, the William Galloway Company made many different types of farm implements in the first years of the 20th century, including tractors, cream separators, even manure spreaders. Today if you want to see operating manure spreaders, you’ll probably have to resort to turning on the TV. My distant relative William even tried his hand at making automobiles. Staring at that red engine, I realized a connection to this area that never occurred to me before, and it involves, of all things, farm equipment.

This year marks the 50th anniversary of the Prairie Land Fall Festival & Steam Show Days, which is one year longer than the anniversary of my coming to Jacksonville. So, bring your family out to the steam show. You may spot me getting my gadget fix as I hunt for family connections in the stationary engine display.