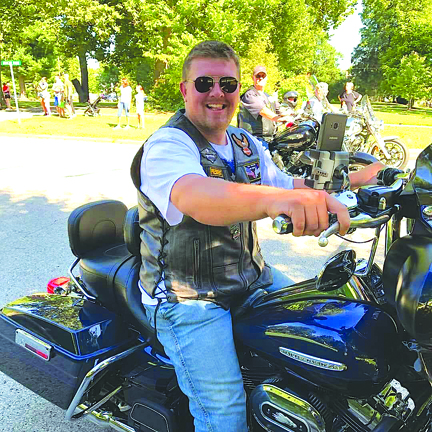 Within the scriptures, followers of Christ are called to go and proclaim the gospel message to everyone. That looks different for all Christian believers and one local body of believers is using a unique way to carry the message.

Harvest Temple, located at 530 S. Main Street in Jacksonville and led by Pastor Archie Beavers, formed the Illinois West Central chapter of the Azusa StreetRiders (ASR) in January of 2018. ASR is a motorcycle outreach ministry group. This local chapter joins several groups nationwide which began in 1999 through a Pentecostal church in South Carolina.

The local chapter is under the leadership of President Austin Seaton. “The decision to start an ASR chapter in our town came from careful consideration and many conversations with Rev. Mark Hardin,” recalled Seaton. Hardin is the Illinois Regional Coordinator and National Chaplain of ASR. “Much thought and time always has to take place when deciding to put a patch on your back in the motorcycle community. We are not a “club,” but a ministry and a certain stigma comes with wearing a patch among bikers,” continued Seaton

Wearing the ASR patch opens the door for person-to-person conversation which leads to members sharing their testimony and achieving the main focus of their ministry; seeing souls saved. When sharing their testimonies with others within the overall biker community, it is important to look beyond differences. “All members must have experienced the New Birth as told in Acts 2:38; attend church on a regular basis, be faithful in tithes and offerings and receive their Pastor’s permission,” clarified Seaton.

The name Azusa stems from the Azusa Street Revival of 1906. This revival was in Los Angeles, California and lasted three and a half years. The ASR hopes and prays there will ultimately be an outpouring of the Holy Ghost among the biker community like there was at Azusa. People see the patch and the conversation begins. It is the hope of the ASR members that these conversations will lead to a conversion experience for the non-believer. They would like to see revival overtake the bikers and the nation as a whole.

Each year all the ASR chapters nationwide try to host two to three rides that would normally include a Biker Sunday. During these weekends, the Saturday ride is considered an outreach opportunity to invite others to a Sunday service. The other goal behind the rides is to raise funds to purchase motorcycles for foreign missionaries. The money collected is donated at the end of the year to that specific program at the national office. To date, ASR has donated 75 motorcycles worldwide which helps those missionaries spread the gospel in those countries.

For more information or to inquire about the local chapter of Azusa StreetRiders, contact Chapter President Austin Seaton at (217) 370-2885.