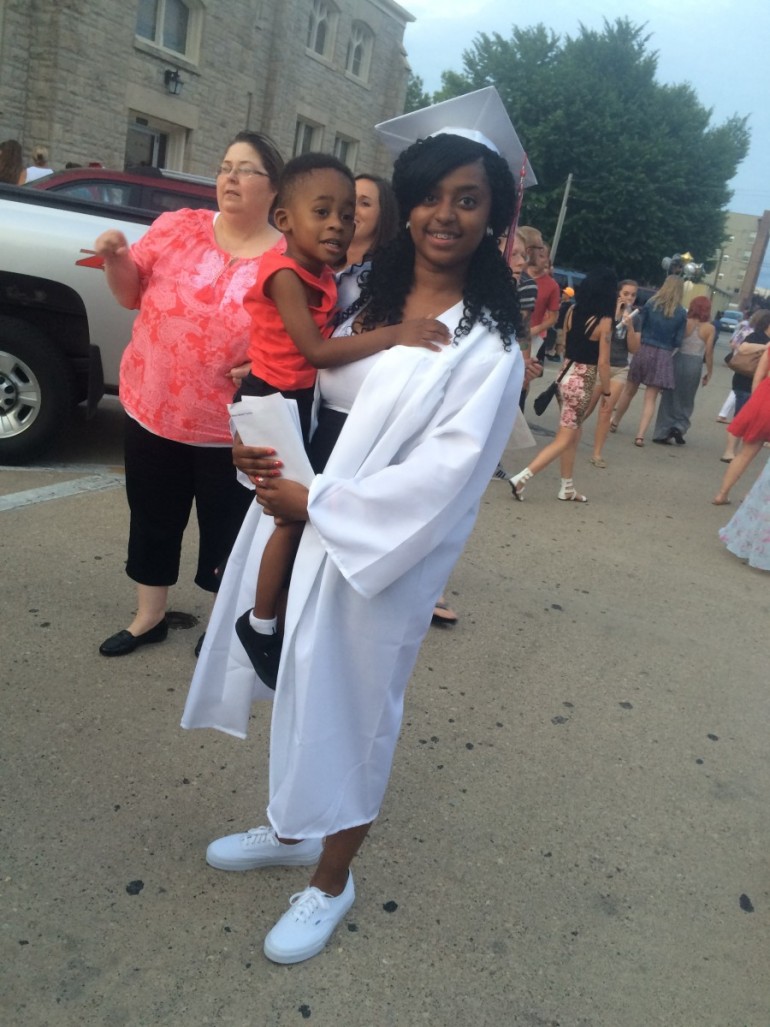 Tatiana Trumbo is a Burger Board Manager, mom of one, and recent high school graduate. When she became pregnant with her son during the beginning of her freshman year, Tatiana says, some people questioned her ability to keep up with her studies. Despite this, Tatiana never gave up on her goal of graduating.

While Tatiana could have let negativity and doubts get her down, she used them as inspiration instead. “You can’t let negative comments hold you back and keep you from doing things,” she says. Tatiana envisioned a better life for herself and her son, TJ She knew that graduating with her class was just one step in showing him that even though she gave birth young, “that never stopped me.”

Tatiana’s grandparents, Zelda and Elmer Mitchell, made it possible for her to attend school every day while they cared for TJ. Her mother also watches TJ six days a week in the evenings while Tatiana works. She is grateful for their moral support and care for her son.

Two staff members at Jacksonville High School cheered Tatiana on over the past four years. She remembers how Mr. VanBebber, her freshman math teacher, checked in with her regularly. He would see Tatiana in the hall and ask about her studies. “Mr. VanBebber always pushed me to do better,” Tatiana recalls. “He was really the one who always encouraged me.”

Assistant Principal Chipman also greeted Tatiana every day with a smile. “He would always tell me good job and keep it up. He always made sure that I knew I was doing amazing.”

Tatiana began solidifying a career plan when a representative from Midwest Technical Institute visited the high school. She initially thought about becoming a dental assistant, then decided that the pharmacy technician program better suited her interests. MTI’s nine month pharmacy tech program makes it possible for Tatiana to gain an education, support her family, and spend quality time with her son.

The Burger Board hired Tatiana a year and a half ago and she calls it an “amazing place to work.” The owners have always been supportive of Tatiana and flexible with her hours as a single parent. “They understand and they work with me really well.”

Looking back at her recent graduation ceremony, Tatiana is filled with pride. She overcame numerous challenges to wear that cap and gown and walked knowing that some never believed she’d graduate. “Action speak louder than words,” Tatiana says. “When I walked across that state at graduation, I proved everyone wrong who had something negative to say.”

Tatiana plans to work another year to save enough money to purchase a car for the commute to MTI in Springfield. Her goal is to begin the pharmacy tech program in August of 2016 and graduate the following year. These goals have been harder with her dual role as a mom, Tatiana says, but “No matter how hard it gets, I will accomplish it if I set my mind to it.”