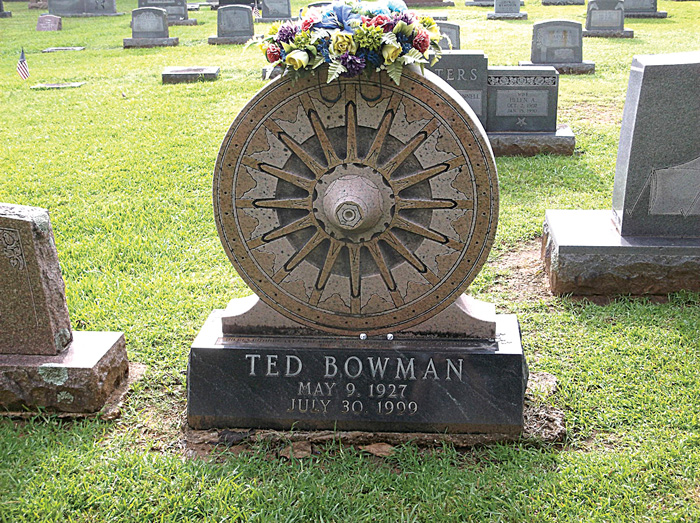 I haven’t thought about Ted Bowman for quite some time. He was quite a character, as was just about everybody associated with Carson & Barnes Circus. Last week I stood in front of his grave marker, a spectacular stone wheel fashioned after a circus wagon wheel. Part of my checkered past includes two seasons working press and publicity for Carson & Barnes back in the early 1980s. Ted Bowman was the circus treasurer. One of the first towns I worked as a newly-minted press and publicity agent was Jasper, Texas. My immediate boss, Charlie Bellatti, arranged for me to work ten towns ahead of the show at the beginning of the season. He then arranged for me to go back to those towns, traveling with the show, to see how it all turned out.

Jasper was the third town I’d ever worked, and also my first catastrophe, or at least that’s how I thought about it at the time. I stayed in a motel across from the Jasper circus lot and noticed, as the dawn came up on the overcast morning of show day, that the lot had been stripped of every blade of grass by a bulldozer. Red Texas clay lay naked to the elements. I was horrified. The 24-hour man, Dewey Welch, was standing in the turn lane of the highway to direct the show on to the lot. It was a cool March morning, so I grabbed my overcoat and ran out to confer with Welch. He asked accusingly what had happened? He just stared at the naked lot. I assured him I had nothing to do with the bulldozing; it was a beautiful grassy lot when I left it a week ago.

Looking skyward, he said, “If it rains …” his voice trailing off. The first trucks of our 80-vehicle convoy were just cresting the hill on the highway when the sky opened up with a Biblical downpour. The circus lot was instantly rendered into a pudding-like mud lake. Every truck that attempted to get on the lot got bogged down in the ankle-deep mire. My coat was not a raincoat, and I had no boots. I just stood there, a waterlogged “First of May,” which is circus lingo for rookie. Everybody seemed to know what to do, except me. I just stood watching as teams of four elephants each dragged 18-wheelers onto the lot.

Standing on the lot, my coat soaked through, mud over my shoes, shoulders sagging, I was in despair. No doubt I was a pathetic sight. Had I made the right choice for a job? Behind me and to my right, I heard the splashing sound of someone walking up to me. It was Ted Bowman, wearing a rain slicker and high rubber boots. With his left hand, he clapped me on my back, sweeping his right arm out to indicate the whole unbelievable scene before us, and said loudly, “Boy, this is circus-ing!” That was Ted’s way of telling me that I was merely witnessing another circus date.

For the show, it was another day at the office. So, there I stood last week, in “Showman’s Rest,” the part of the Mount Olivet Cemetery in Hugo, Oklahoma, set aside for circus folk. It’s been 35 years since I worked on the front end of Carson & Barnes Circus. Many of the people I knew back then are now buried alongside Ted. I’m sure Ted soon forgot his words of encouragement to me that day, but for me they remain a vivid memory. There’s a lesson in that.