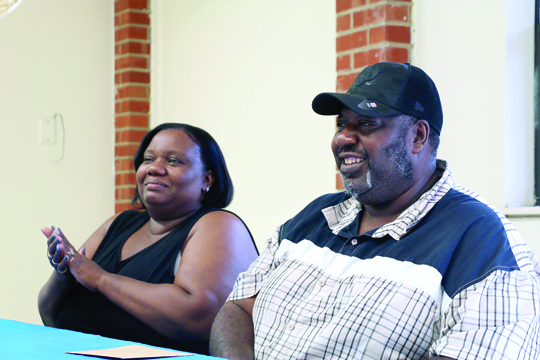 A group of Morgan County Housing Authority (MCHA) office staff and maintenance staff gathered just before 10 a.m. on Friday, September 11. Standing outside of the office of the MCHA Service Coordinator and waiting for the arrival of a family they chose to recognize, some of the MCHA staff discussed the family.

The group consensus was that Walter and Manie Sanders had been living with them “probably about 20 years” and “forever.”

In this instance, “forever” is a response that the MCHA or any landlord should be proud to claim, as Morgan County Housing Authority had noticed Walter and Manie Sanders. The Sanders family has been tenants for many years and MCHA “would like to honor them for taking care of their property and those around them as well,” informed MCHA Service Coordinator Nicole Robison.

The look on the faces of Walter and Manie Sanders when they pulled up outside the office to see the gathering showed a bit of confusion understandably; they had no idea what was really happening. Under the pretense of needing the couple to stop by to talk that Friday morning at 10, Chris Elliott, one of the maintenance foremen at MCHA, had set up their arrival.

The husband and wife walked inside to see a table with cupcakes, ice cream, confetti and balloons. A second table was set up with balloons and a chair for Walter and Manie each.

As the staff also made their way inside, Walter Sanders joked, “This is the fanciest eviction I’ve ever seen.”

It was clear that these two were good-hearted people.

The staff announced the true reason for the gathering and presented the two with a card, which had been signed by each of the staff. The speech was thoughtful, talking of the appreciation that the maintenance crew and staff have for the Sanders family. The tone was simple goodness — taking the time and effort to acknowledge people who do a little extra, who pick up and do their best to keep clean their community and the area within which they reside.

Manie Sanders says she and her family had lived with MCHD since 1993 essentially, living elsewhere only for a few short stints. The Sanders’ children are all now living on their own. She mentions, “Our last one moved out a couple months ago.”

Without pause, Walter Sanders grinned and chimed in with an excited, “Yeah.”

His wife’s giggle in response was endearing. The two say they spend a lot of time visiting with their grandchildren. Otherwise, they’ll keep us helping out. “We just like to have it neat and clean. He do it mostly by himself when I’m at work; it’s his pastime … when they mow the yard, he picks up the trash.”

Well done, Walter and Manie Sanders. Kudos for showing pride in your surroundings; your recognition is deserved. To the MCHA maintenance crew and staff, well done for not only being aware, but ensuring that helping out does not go unnoticed.