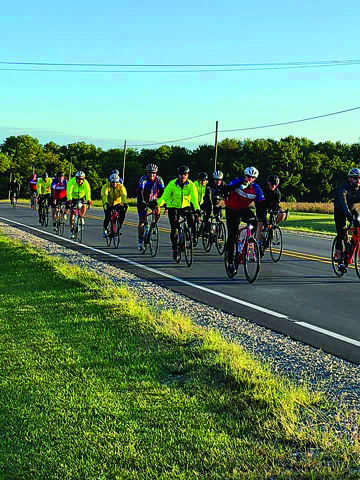 Mom of local hero participates as nurse in event

Since its inception in 2017, the Gold Star Mission (GSM) has awarded $164,000 in scholarships in remembrance of the fallen soldiers from Illinois. Each year they host several cycling, running and walking events across Illinois. These events raise funds for the annual scholarships. One event, the 2021 Gold Star Mission Gold Star 500, took place September 21-25 and one local Gold Star mom traveled with the participants.

Joining the cyclists on the just over 500-mile journey was retired registered nurse, Susan Weikert of Jacksonville. After she and her husband, Richard “Dick” Weikert, attended a couple of scholarship banquets to meet the recipients of a scholarship in the name of their son, Matt, they were impressed with how much GSM did for Gold Star families.

Their son, United States Army Staff Sergeant Matthew Weikert of the 101st Airborne Division was mortally wounded in July 2010 while serving in Afghanistan. He originally enlisted in August 2001 with the United States Marines, serving three tours in Iraq in over four years. Once he moved to the Army, he served one tour in Iraq and then was deployed to Afghanistan. “I was so grateful to this organization for all they did for Gold Star families that I wanted to give back in some way, so I offered to volunteer. They found out I was a retired RN, so this year they put me to work as their medic,” states Susan Weikert.

Initially GSM was formed to honor and preserve the memory of 34 fallen Illinois National Guardsmen. During the inaugural ride, the support from the Gold Star families was tremendous. Because of this, the organization decided they would expand to include the 300 Illinois fallen soldiers from every branch of service since 9/11.

This year’s Gold Star 500 began in Decatur and proceeded 108 miles to Urbana. On day two, the cyclists rode 122 miles from Urbana to Lawrenceville. From Lawrenceville to Mount Vernon, they logged 102 miles on day three. The next day was another 102 miles from Mount Vernon to Effingham. On the final day, the trek was 89 miles from Effingham to Springfield and ended with a ceremony at Scheels. The route is changed annually making sure that the whole state is covered. The route for 2022 will go through Beardstown and the route for 2023 will include Jacksonville.

There were 18 bicyclists, including one female, that came from 10 different communities; ages ranged from 34 to 80. There were also several volunteers. Daily scheduled break every 15 to 25 miles were made for the participants to refill their water bottles, plus several veterans’ groups, civic organizations, fraternal organizations and school groups provided meals and support along the way. The riders also gathered donations from various organizations and groups raising money to go toward these scholarships. Each night the riders and volunteers spent the night in Illinois National Guard armories.

Before departing from a rest stop or ending any meal, they took an opportunity to honor a fallen soldier from that area. If a Gold Star family member can be present, they are given the opportunity to share about their fallen soldier. Out of the 300 families representing the fallen soldiers, GSM has had the honor of meeting 60 of them. “It has been a great experience with an amazing group of people,” concludes Weikert.

Each scholarship awarded is worth $1,000 and since the beginning they have awarded 164 scholarships, each one named after a fallen Illinois soldier. Along with receiving a certificate with the name of the fallen soldier, each recipient receives a stainless-steel memorial bracelet with the soldier’s name engraved on it. Students can submit applications for the scholarships starting November 1 through January 15 of the next year. Each February or March, GSM holds a “Scholarship and Appreciation Banquet” to name that year’s recipients. This banquet has been canceled since the start of COVID-19, but organizers look forward to having it back in the future.

From 2017 to 2020, GSM-sponsored cycling events have logged 74,929 miles. In addition, running and walking events have tacked on 4,182 miles. All financial support is focused on the scholarships they offer. Along the way, they have engaged hundreds of communities. GSM is a nonprofit 501(c)(3) organization, and all donations are appreciated. You can follow the work of GSM through their Facebook page, “Gold Star Mission” or find them at goldstarmission.org.