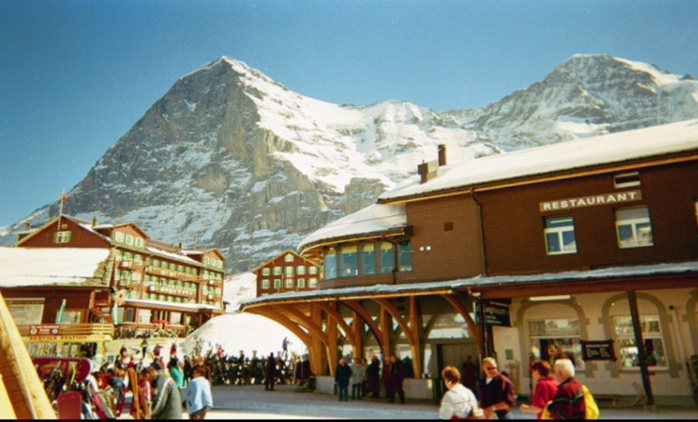 I had seen the words “The North Face” on clothing but had no idea the reference.

The North Face is a foreboding wall of rock that draws the best mountain climbers from around the world. From many places in this small resort village, with telescopes and binoculars, you can watch the climbers as they attempt to scale the steep face. Increasingly, climbers have made the ascent in the winter because the ice and frozen rock are more predictable.

The 1972 novel The Eiger Sanction is an action story by Rodney William (Whitaker) Trevanian, based around the climbing of the Eiger. This was the basis for a 1975 film starring Clint Eastwood and George Kennedy. The Eiger Sanction film crew included very experienced mountaineers who consulted on the reality of the script, equipment and strategy.

The German name for the face is “Nordwand” meaning North Wall. Since 1935, at least sixty-four climbers have died attempting the north face, earning it the German nickname, “Mordwand,” or “murderous wall,” a play on the face’s German name.

The North Face, considered among the most challenging and dangerous ascents, was first climbed in 1938 by an Austrian-German expedition. Alpine Journal editor Edward Strutt called the face “an obsession for the mentally deranged.”

The first females to make the ascent were three women from Poland in 1972.

My climbing experience? After skiing on some very reasonable slopes, I climbed the steps to the restaurant for lunch.