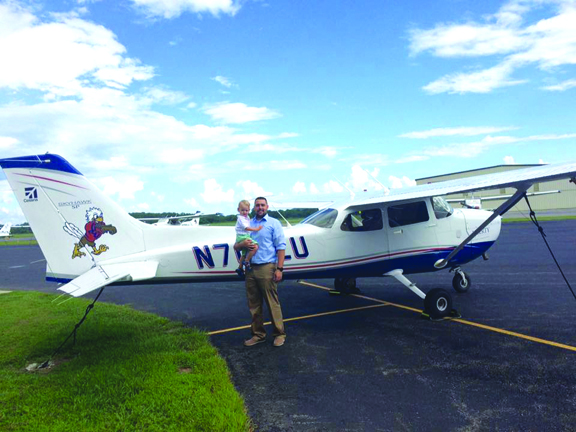 Officially taking the position on January 6 is Alex Helmich. Along with his wife Khristina and two children, Maverick and Forrest (with one on the way), the Helmichs relocated from Bolivar, Missouri back to the Jacksonville area. Both Helmich and his wife are alumni of Westfair; graduating in 2006 and 2008 respectively.

Upon graduating from Westfair, Helmich enlisted in the Army and was active duty with the 101st Airborne Division until 2010. “I was a diesel mechanic and when I was deployed to Iraq in 2008 I also cross-trained to do CRAM air defense missions,” recalled Helmich. C-RAM stands for counter rocket, artillery, and mortar. “I was in 2/44 Air Defense Artillery Battalion. It was the Alpha Battery dubbed the ‘brotherhood,’” tells Helmich. He turned to the aviation field while going through the air assault training at Fort Campbell in 2007. During his training, he took his first ride in the UH-60 Black Hawk helicopter and that single experience made him realize that a career in aviation was for him.

Even though his training and vocational pursuit began in his military career, Helmich began his official flight certification education at Liberty University in 2011 through their helicopter program. After receiving the certification for helicopters he pursued his certified flight instructor certificate or CFI.

Among many responsibilities at JMA, his main focus will be flight instruction. “As an instructor, I will be taking new students and teaching them to fly to obtain their private certification,” commented Helmich. Among other duties Helmich will perform will include Flight Reviews so pilots can keep their currency, as well as perform discovery flights for anyone interested in flying. Those flights are $80 for a 30-minute flight. To pursue a student pilot certification, you must be 16 years old. For private pilot certification, 15. Overall, you must be able to speak, read and write in English. “To pursue a private certification there is a fairly serious commitment to training and studying. Depending on the student’s schedule and financial commitment it could take anywhere from a few months to a year to complete the training,” concluded Helmich.

Jacksonville Municipal Airport is located at 1956 Baldwin Road. It was founded in March of 1946. The airport primarily serves local people who store their own airplanes and fly in and out from there. They are also a convenient stop for refueling small aircraft flying through the area and local industry use it to fly in company executives from other parts of the country. All those interested in learning how to fly are encouraged to call the airport and speak to Alex at (217) 243-5824.