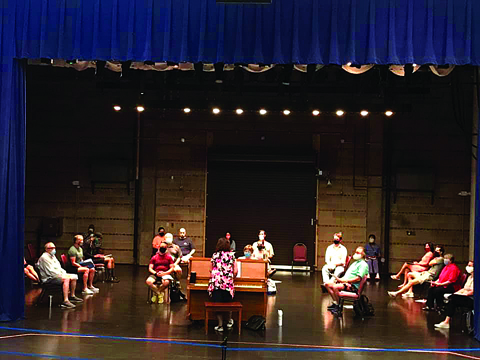 Our 16th President, Abraham Lincoln, has been the subject of countless books, films and documentaries. From his childhood in Kentucky and Indiana, to serving as a shopkeeper and postmaster as a young man in New Salem, the rise of this self-taught lawyer through politics to serve in the highest office in the land and ultimately pay the price with his life because of an assassin’s bullet has been a remarkable story.

On the occasion of the 200th anniversary of his birth, celebrated in 2009, the Jacksonville Lincoln Bicentennial Commission solicited local playwright Ken Bradbury to do what he did best, tell a story.

The late Bradbury had teamed up with local musician Roger Wainwright to put together “The Spirit of Lincoln,” a compilation of research, interviews and conversations, created along with the help of dozens of Lincoln experts and enthusiasts. The production was staged in Jacksonville at Sophie Leschin Theatre in February of 2009 and then again that March at Springfield Theatre Centre at The Hoogland Center for the Arts.

Bradbury summed up the production best within the pages of the audience program, writing, “explore the living Lincoln … the Abraham Lincoln who is still very much with us, whose spirit continues to be an inspiration to those who knew him and those living today who can still feel the influence of the man who so many regarded as one our greatest Americans.”

Now, this historical piece is being resurrected. The Springfield Theatre Centre, with Heartland Credit Union and The Ken Bradbury Foundation, enlisted the help of Hope Cherry to serve as director for the filmed production of “The Spirit of Lincoln.” This unique production is in rehearsals at The Hoogland Center for the Arts, utilizing the talents of 25 Central Illinois actors, six dancers, three musicians and 10 people serving on the production team. It will be filmed October 10 and released some time in November.

There are many seasoned actors from the area involved. Some had the opportunity to work with Bradbury on past theatrical endeavors and some enjoy all things Lincoln. “It’s great to have some of the original cast/staff involved in this production,” stated Cherry. “I, like so many people, miss Ken terribly. His writing is so direct, simple, and true. He was an incredible storyteller.”

Some of the original production members include Laura Roth, who was a dancer and is choreographing several pieces for the film. Steve Varble helped design several elements of the original show and is the set designer for this production. Keith Bradbury appeared in the original production but, this time will be playing the role that his older brother had played. “Ken always believed that history should not totally define Lincoln,” remarked Keith Bradbury. “The people who knew him, the people who experienced the man, not the image; that will show us his true greatness.”

As rehearsals continue, the production team is working on finalizing all the details regarding showing the finished product. “Our first showing will probably be via streaming. People will be able to purchase the show and watch it on their TV or computer,” commented the director. “We are also working with The Abraham Lincoln Presidential Library and Museum in hopes to have an outdoor showing in the square across the street on a large outdoor screen.” Many other options are being explored from PBS or other local cable channels to ultimately have DVDs for sale in the future.

Because of the COVID-19 pandemic, theatrical productions are practically nonexistent, so Cherry worked very closely with Springfield Theatre Centre Board of Directors in developing policies that would keep everyone involved safe. “The greatest advantage of this show is that Ken wrote it as mostly monologues with minimal dialogue,” concluded Cherry. “Actors won’t have many interactions with the other actors and they’re projecting their voices into an empty auditorium.” When the actors are not on stage, they wear masks. After each rehearsal, everything is sanitized, as well.

With the precautions being taken, everyone involved feels safe and they are glad to be back on stage again. Local actor Brad Barnes, a 25-year veteran of Central Illinois theater and many Bradbury productions, summed up the collective thoughts of those involved: “Being back on stage has given me a sense that, no matter what, we will persevere. Also, this serves as a theme that runs through the show. Ken always had a way of bringing people together to inspire each other.”

For information about the cast and dancers involved, and the best way to keep up on updates about “The Spirit of Lincoln” project including how to watch the finished product, follow Springfield Theatre Centre through Facebook or their website www.springfieldtheatrecentre.com. You can also be updated through The Ken Bradbury Foundation page on Facebook.