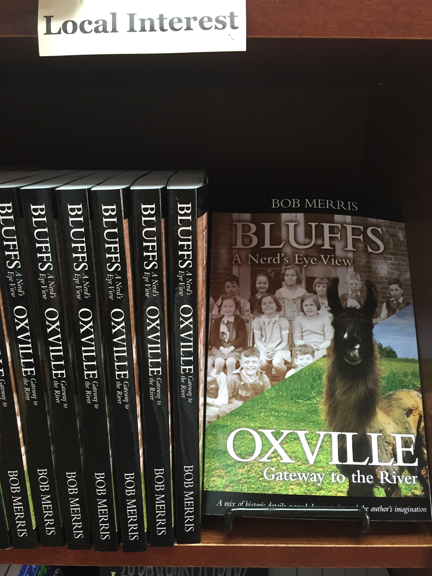 Bob Merris, an octogenarian of considerable accomplishment, is not yet ready to rest on his laurels. With his latest book still hot off the press, he already has the title for his next one. Now he just needs to write it. And I’ve no doubt he’ll have a complimentary copy in my hands come Labor Day next year. But let’s not get ahead of ourselves.

Our Town Books will kick off this holiday weekend with a signing by Merris. Respected author of local history, Bob Merris is an affable raconteur. It’s always a pleasure for me when he visits the bookstore while his gracious wife, Mary, visits the hairdresser down the street. Funny, but I feel a bit like a barber myself sometimes, in the sense that I spend a fair amount of time listening to customers tell their stories. In most cases (certainly in Bob’s), I consider it a perk.

From 5 p.m. to 7 p.m. Friday evening, Mr. Merris will be signing copies of his new book on Oxville, Ill., and his hometown of Bluffs, Ill. It’s really two books in one, the first part sort of augmenting his previous book on Bluffs and the Wabash Railroad, while the other half concentrates on the nearby village of Oxville.

My father grew up in the title town of Bob’s previous book, Naples. So I’m familiar with the territory. My great aunt and uncle, Eve and Howard Savoy lived in Bluffs, and I remember visiting their home in my youth. I remember trips to the old Boatel as well, family outings that have rarefied into myth. The last time I went to the original restaurant I was old enough to drink beer with my dad. It was an afternoon excursion, just the two of us “shootin’ the bull,” as he used to say, washing down gizzards with cans of Busch. Ah, poor folk delicacies. Not that we were poor by any means. But growing up in Naples during The Great Depression, Dad hadn’t been exposed to haute cuisine. And, even though he experienced much more of the world as an adult, he often hailed himself a river rat at heart, never too proud to claim his roots.

Years later I recall dining in the oyster bar of Shaw’s Crab House in Chicago (no doubt lamenting a long afternoon at Wrigley Field), savoring shrimp cocktail and several local micro-brews. Harking back to the old days, Dad mused that, yes, this fine food was something to relish, but still, it had nothing on those gizzards at the Boatel.

I treasure these memories like the arrowheads and morels we hunted near the banks of the Illinois River. Although I don’t remember ever finding many of either on our muddy tromps, our time together was the true and lasting reward.

Sorry for my personal digression. But that’s how it goes with storytelling, you get carried away, sometimes a little off track. But with a good storyteller, you enjoy the ride. And Bob is a very good one (and a fine historian to boot). So hop on into the bookstore and have a conversation with him. You’ll enjoy the experience. You might even learn a thing or two.