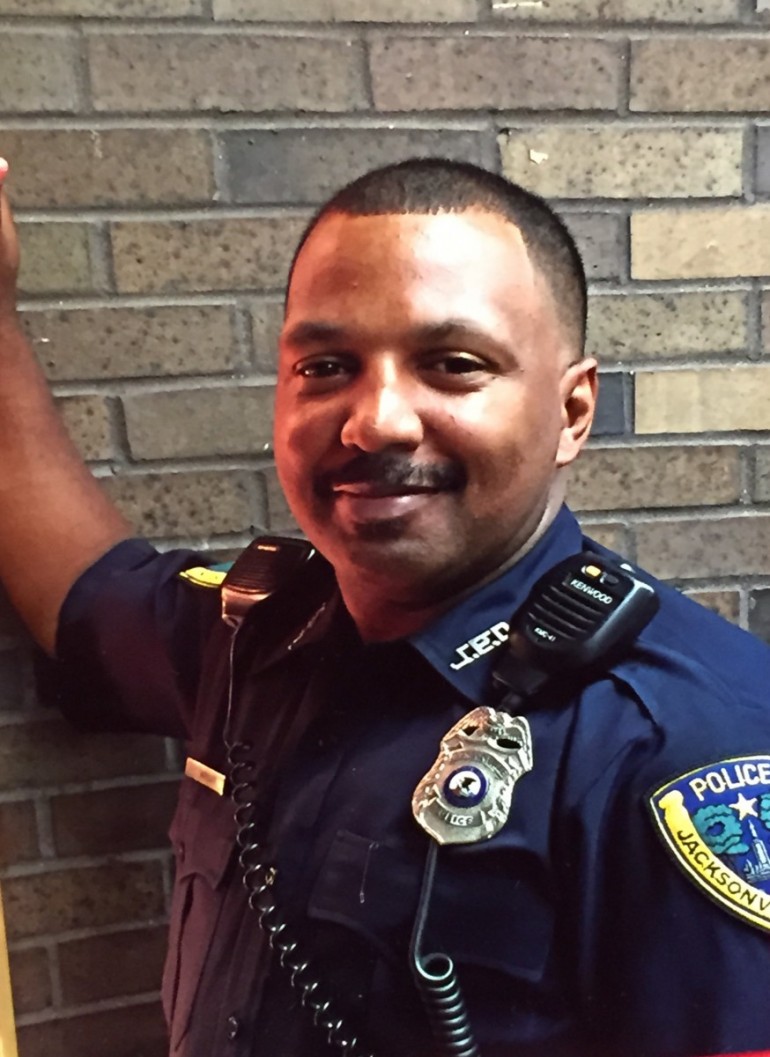 In this case, the “town” is Jacksonville High School. The sheriff could be perceived as Principal Mike McGiles or even Dean of Students Mark Grounds. But there is only one member of the high school staff wearing a badge, and that’s Jacksonville police officer Craig Wright, the new School Resource Officer. Meeting with him, Officer Wright has a presence that’s friendly but professional.

Replacing longtime SRO Dave Melbourne, who held the position for 14 years, Office Wright is a man sincerely living out a dream. A Jacksonville native and family man, he is still settling into his new duties.

A veteran patrol officer of the Jacksonville Police Department of more than a decade prior to his appointment to the high school, Wright and his wife returned to Jacksonville with their young family to fulfill childhood dreams of being a police officer and a nurse. Both have achieved their dreams, sinking their roots deep into their hometown.

Once Officer Melbourne made his decision to retire, Wright sat down with his family to discuss the opportunity before pursuing the position.

“I thought I fit the bill. I’m pretty good with kids, and since my oldest is a senior, I’ve had interaction with some of the high school kids.”

Already actively involved in the local youth football and basketball programs to try to be an added role model, Wright wanted to continue his pursuit in helping make the community better by working with teenagers.

“When you think about why you become a police officer, and what it’s all about, this is where it starts. It starts in the schools. You want to teach kids… you want to be a role model. You want them to learn to not break the law, to not go on the wrong side of the tracks.”

SRO Wright is well aware of the current gap between law enforcement and the community, as well as trying to bridge the gap involving minorities and the perception of police.

Does Officer Wright feel having a police officer of color as the SRO offers the potential for being a powerful initial step in community relations?

“Correct. And our department just hired a second female officer. And in all aspects, our department has to do better and get better in mirroring our community. And I think this will help. I hope this will help get more people in general interested in law enforcement, especially minorities.”

Officer Melbourne served for 14 years, the last five with a police narcotics dog, Dana, which served as a great liaison with the students.

“Yes, we just went from comfortable, to opening that gap really far. Hopefully, change is good in this nature. It’ll give another perspective. And we don’t have the dog this year. Dana was a very important link between the students and law enforcement, and her absence adds to that gap during this transition. So hopefully, we’ll come up with some programs, some pieces to the puzzle to close that gap, and find a new comfort level.”

So, before you received the position, had you spent time at the high school as a “sub” for Officer Melbourne? Did he offer up any advice about the job?

“No, I didn’t, but I did shadow him for a few days near the end of the last school year. And he did share some words, but after having been here for such a long time, it’s a totally different perspective for me coming in new to the situation.”

Is the new SRO having fun?

He laughs. “I am. And my wife asked me that. The first couple of weeks, it’s more about getting to know…so many names here, so many students. I’m having a good time, meeting lots of students. They’re learning that cops aren’t bad, that they are friendly, and you can approach them. We can help with just about any problem, or direct you to someone who can. That’s what kids need to know. I think it’s a great school.”

Any problem areas on your radar so far?

“We have a great team here at JHS. Everyone wants to work together to make this school run properly. That’s been evident from the get-go. As far as trouble areas I’ve seen, the only thing I could say would be traffic. We have to, as a community, do something about the traffic pattern here at JHS. It bottlenecks. When it comes time to release from school…Right now if there was a crisis here at the school, any time after 2:45, it’s not healthy for the community. Traffic is so backed up, we would have trouble getting emergency equipment in here. That’s the only problem I see, and we’re working on that. Other than that, it’s been very smooth. Like I said, we have a great team here, so far from top to bottom, everyone has been willing to help out, to take care of whatever needs taking care of.”

As a Jacksonville High School graduate, does the building seem the same as when you attended?

“Walking the halls, it’s pretty much the same. Of course, the technology in the school has changed a lot, but the school is pretty much on point. Brings back memories. It feels good. ”

How is your mindset different from your former patrol duties to being the SRO? Any major adjustments?

“Well, I worked overnights for over 8 years, so probably the biggest adjustment was just getting up in the morning and functioning all day. My mindset hasn’t changed a lot. I consider myself pretty straight forward. Officers don’t make the laws, we enforce them. Kids and adults – their mentalities are different, but some of their excuses are always the same. With the kids, I have to be patient. It’s much more about teaching them right from wrong, and making sure they try to stay on the right path. With the adults, at their age, can I really teach them? It’s usually more about the consequences and dealing with the court system.”

“I’m here to do a job, but I’ll say it like I tell my kids. We’ve all been kids too. So, we know what it’s like to go through our teenage years. So you have to keep an open mind. Know that the administration, myself, all the way up to the superintendent and the chief of police, are here to help. We’re not here against anybody. That’s not our role. If you have questions, feel free. Doors are always open. We will sit down with you, with or without your child, and come to a conclusion or at least an understanding, of how things took place and how things work. Parents don’t always have to wait until something bad happens at school, you know. If you’re having trouble with your child at home, outside of school, come talk to us. We’re not just here for the bad.”

“Like I said, I’m hoping we can make a difference.”

Officer Craig Wright appears to hit all the right notes in stepping in for departed Officer Dave Melbourne and Dana. The SRO position starts with being a good person and solid citizen, and Jacksonville High School has been fortunate to have one good man follow another.