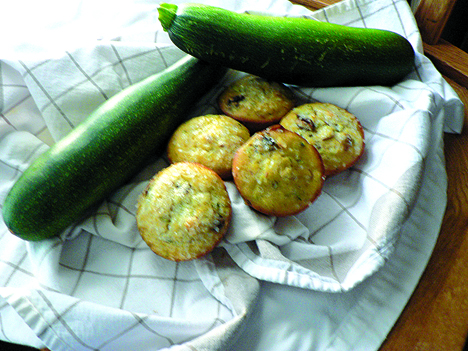 To many, August is the climax to the summer season. However, this season encompasses a less publicized season … Zucchini Season!

Why you might ask? Because during zucchini season, like the season of Christmas, it encourages gift-giving to others whether the others desire the gift or not. How you may ask does this revelation come to me? Well, let me guide you.

While living in the state of Vermont, the zucchini season warned all to lock their cars to prevent generous unsolicited gifts of zucchini. Humor is good, but what does one do with a large or small zucchini?

As a former gardener, I needed to solve my zucchini puzzle. Years ago, a nurse provided a solution to my dilemma. She suggested for me to first select a recipe of my choosing than prepare the uncooked zucchini, bag, mark, and freeze the amount of zucchini to satisfy the recipe.

Keep in mind, if you use this freezing method, drain the thawed zucchini. Each summer I prepare two cups of shredded unpeeled zucchini for my freezer. Often during the cold months, I bake my unfailing moist zucchini chocolate cake. When members of the young generation view green lines within the chocolate cake, I assure them the lines are not worms but shredded unpeeled zucchini. Once satisfied, the young ones continue to enjoy the dessert set before them.

According to the Healthline website “Zucchini aids your bones and thyroid…” Zucchini is a versatile fruit used in various savory and sweet recipes. My favorite websites for recipes are www.williams-sonoma.com, kingarthurbaking.com, and marthastewart.com. Trust me these websites among others will create enthusiasm for you as well as those who will enjoy your culinary efforts.

Weekly I receive an email from King Arthur Baking Company, formerly known as King Arthur Flour. In a recent mailing, my eyes and appetite moved toward a “Simple Zucchini Bread” recipe. Then I recalled the zucchini which I purchased from Kevin and Nancy Brodie at the Jacksonville Farmers Market. Decisions, decisions worked throughout my mind as to what to bake, my favorite tested recipe for chocolate zucchini cake, or should I be adventurous and follow King Arthur’s Simple Zucchini Bread? With two choices before me. I recalled Robert Frost’s poem entitled “The Road Less Traveled.”

While I prepared King Arthur’s recipe for Simple Zucchini Bread I deviated, which I often do when following a recipe. I replaced the walnuts and raisins with unroasted sliced almonds and dried cranberries. For the liquid, I added orange juice with ¼ teaspoon of orange rind. The spice I used was nutmeg and I avoided the baking soda.

I must say the packed brown sugar added a new dimension to taste. Instead of a loaf pan, I baked the batter in two well-greased muffin pans and cut the baking time to thirty minutes. Once cooled I grouped the extra muffins and placed them into zip-locked bags before placing them into the freezer.

As in past winters, I will once again be grateful for a bountiful zucchini season.