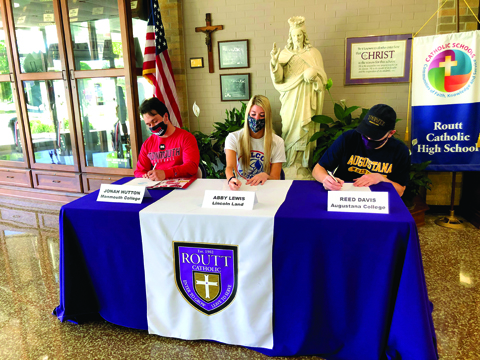 On Wednesday, May 12, the following three seniors at Routt Catholic High School (RCHS) made commitments to continue their athletic careers:

Abby Lewis, daughter of Jay and Angela Lewis, signed a letter of intent to play volleyball at Lincoln Land Community College. Abby is a 3-year letter winner, a 3-year starter, 2-time most improved for the Rockets and a 2-time 1st team WIVC All-Conference selection. “Abby is an outstanding young lady that I’ve had the pleasure of coaching for six years,” said RCHS Volleyball Coach Pat Gibson. “I look forward to watching her continue her career at Lincoln Land and then who knows where it’ll be after that.”

Reed Davis, son of Eric and Dana Davis, signed a letter of intent to wrestle at Augustana College. Reed is a 3-time letter winner in wrestling and has amassed 60 wins at four different weight classes throughout his high school career. One of his personal highlights is making to the bloodround in sectionals as a junior. Reed is also a 2-year letter winner in football and a letter winner in boys’ swimming. He is also involved in drama and theater. Reed plans to major in engineering.

Jonah Hutton, son of Amanda Hutton, signed a letter of intent to play football at Monmouth College. Throughout his time at Routt, Jonah has served as a football captain and is also a 4-year letter winner. He is a 2-time WIVC All-Conference selection as both linebacker and offensive guard. He was named the defensive player of the year as a junior and he led the team in tackles the last two years. Jonah has lettered 13 times at Routt through his involvement in swimming, wrestling, track and football. He averaged 12 tackles per game as a senior and he had one carry for 5 yards. Jonah is a member of NHS, NEHS and has been on the high honor roll all four years. He plans to major in engineering.