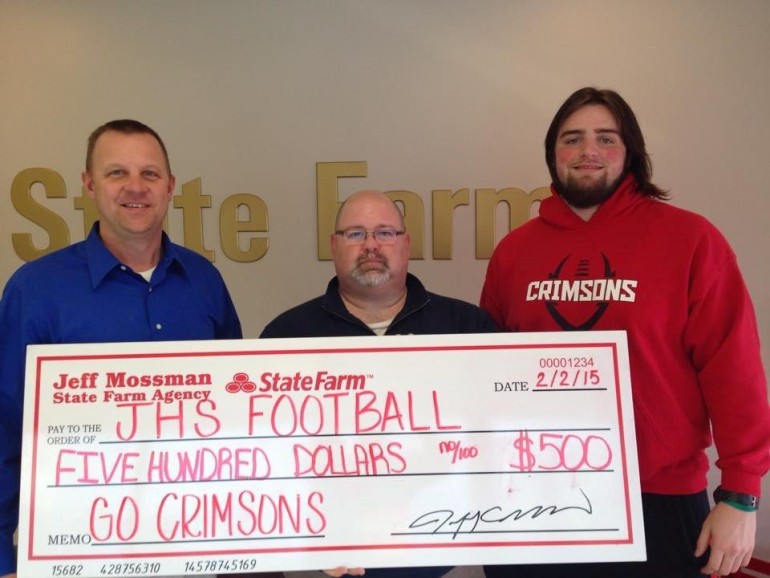 If you’ve been to a Jacksonville Crimsons’ home football game over the past six years, there’s a good chance that you’ve heard the name of local State Farm agent Jeff Mossman. Starting with the 2010 season, each time the Crimsons find the end zone at their home field, you’ve heard the local announcer read the promotion: “with that touchdown, local State Farm agent Jeff Mossman will donate $25 to Jacksonville High School football”. And as the sixth season of the promotion comes to its conclusion, Mossman has donated approximately $2,500 to the JHS football program.

Since moving to Jacksonville more than a decade ago, Mossman has found success as an insurance agent and a community that he’s proud to call home. Those who’ve been fortunate enough to meet or work with him will all tell you the same thing: that Jeff Mossman is one of the friendliest, and sociable people they’ve met, an extremely likeable individual in a community which he sincerely cares about. Characteristics such as these are what make him a successful insurance agent, and they’re also the reason why he wanted to start the Touchdown Promotion with Jacksonville High School football.

“I got the idea from a different State Farm agent in Petersburg who’d been doing it for a few years,” Mossman said of how the idea first came about. “And he said that I ought to give it a shot, because it’s a great way to support the local community, it’s something you like, and it’s pretty good advertising.”

Although Mossman never played high school football himself, he quickly realized the importance of the sport and the impact it had on the city of Jacksonville. As for where the money goes once it’s donated, head coach Mark Grounds uses extra funds to help send kids – those who otherwise couldn’t afford it – to team camps during the offseason.

“I just love JHS football and I want to support them, and it’s a win-win because it’s something I believe in and it also benefits the agency,” said Mossman. “Of all the generic advertising you can do, this here, there’s no way to quantify how much business it’s brought me over the years, but I hear people make comments about it. For instance, walking through Wal-Mart and someone saying ‘We really cost you last night’, that’s fun to hear.”

Anyone with a television set and a subscription to cable have inevitable heard one of the many State Farm slogans, such as the “discount double check” or, my personal favorite, the commercial featuring “Jake…from State Farm” appearing in his now-famous “…khakis”. But there are still other slogans or mottos associated with the company, and thanks to Mossman’s promotion, there’s been at least one occasion in which – after hearing Mossman’s promotion a number of times throughout the game – the local crowd incorporated one of State Farm’s most well-known catchphrases into their unified cheers.

“One year, at one of the games, they starting singing the State Farm “Like a Good Neighbor song in the stands, and I thought ‘How much better could it get’?” said Mossman.

Along with JHS, Mossman also does the same TD promotion with Routt’s football program, recognizing the importance of both high school education, as well as high school sports, in developing his community.

“My kids go to Our Saviors and will probably go to Routt, but I’m a supporter of both schools, and that’s something our community needs,” Mossman said. “For Jacksonville to thrive, down the line, we’re going to need kids coming out of our high schools that are well-rounded, and team sports like football, there’s life lessons involved there. If you make it successfully through your high school football program, I feel like you’ve got maybe a little better shot to be a better member of our community.”

“It benefits me if I can feel like I’m contributing in some small way,” said Mossman. “It all comes back around. I want these kids to come out of the program successfully, and I want them to stick around Jacksonville as good people, cause in the long run, it will benefit my agency and the overall community someday.”