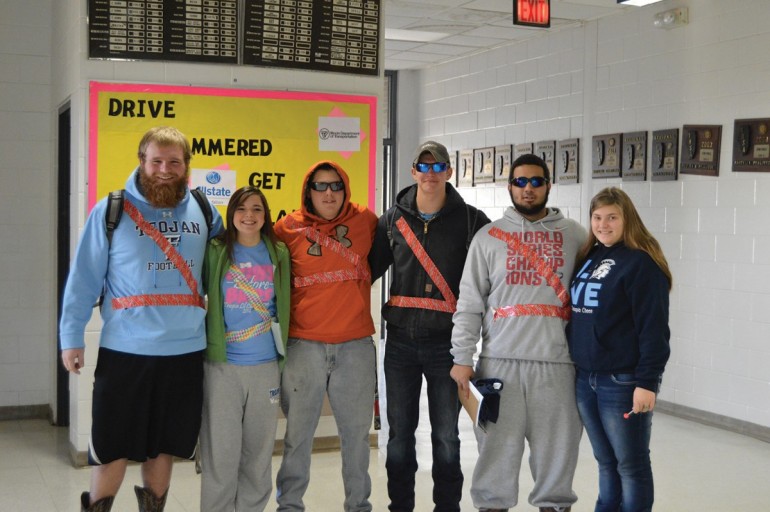 Driving is a very common part of most people’s everyday life. The majority of people, especially teenagers, do not pay much attention to the dangers of driving. Triopia Jr./Sr. High School is participating in a program to educate young drivers about the dangers of the road. The program is called OTSD, which stands for Operation Teen Safe Driving. OTSD hosted a Safety Week at Triopia through the days of January twentieth through the twenty-fourth.

Each day there was a different dress code. On Tuesday the students were asked to wear belts or pajamas. The belts were to remind everyone to wear their seatbelts when they drive, because seatbelts can save a life if an accident were to occur. The theme of pajamas was to remind everyone not to be lazy, and to pay attention at all times while driving.

On Wednesday it was bright color day. All the students wore bright colors to remind them to “keep their future bright.” Triopia also had Wednesday be their “Day of the Dead.” A student would dress up as the Grimm Reaper and randomly throughout the day pull students out of class. When the Grimm Reaper would bring the students back, the student’s face would be covered in make up as if they were dead. They would be wearing a black shirt to say how they had “died.” One shirt read, “A drunk driver hit me.” Another said, “I was putting on makeup,” or, “I was texting and driving.” This made students realize how easy it is for things to get out of your control.

Thursday was stop light day. The seniors and juniors wore green, the sophomores and freshman wore yellow, and the Jr. High wore red.

Friday was black out day. It was aimed towards drinking to remind kids to stay safe, and never to drink and drive. All the students wore black to remind themselves not to “black out.” OTSD also had someone come and speak to the entire school. Rick Fulks, a professional racecar driver, spoke about how important it is to be careful when driving.

Throughout the entire week, classes were participating in activities in the gym that showed the dangers of driving. OTSD has also been at several Triopia ball games with different messages of safe driving. They are trying to reach out to the community and teach how important it is to be a safe driver.

Driving may seem like a simple task. You turn the key, put the car into drive, press the gas, and steer the wheel. It isn’t hard to do those things. It’s actually pretty easy. Sometimes it is so easy that your mind begins to wander. Some people think it is so easy that they can do it even while intoxicated. A very large majority of people will drive distracted or intoxicated multiple times and nothing bad will ever happen, but OTSD wants to help prevent that one time that things go wrong. That is all it takes… one time. One bad decision, one second in the wrong place at the wrong time, one mistake… that is all it takes.

People here aren’t invincible. Accidents are going to happen, but OTSD is trying to reduce that number by reaching out and educating as many as we can about safe driving. On behalf of OTSD, please do not text and drive, drive under the influence, or drive distracted.