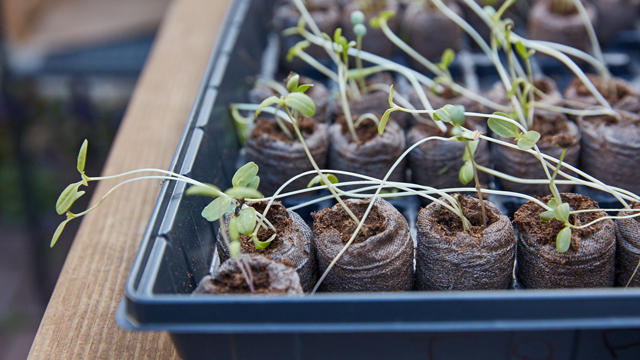 For many of us, the desire to start gardening gets stronger and stronger as we near spring. Seed starting is a popular way to kick off the gardening season. Despite the advantages and relative ease, there are a few things that can go wrong when you start your own seeds.

Why do I have long, leggy seedlings?

One common problem people encounter is long and leggy seedlings (etiolated). While several factors can cause this, insufficient light is the most common cause. While it is possible to start seeds on a windowsill, often we don’t get enough light (both duration and intensity) in this part of the country for proper seedling development. Providing supplemental lighting can help prevent seedlings from getting leggy.

Why are my seedlings dying?

There are several reasons why seedlings may die once they’ve germinated, and often it is due to too much moisture.

When growing media has too much water in it, there often isn’t enough oxygen present to support the roots of a plant, which can lead to root dieback. Plants growing in these conditions will often lead to plants having a wilted appearance, leading many people to water them more, further exacerbating the problem.

Damping off can also be a cause of seedling death. It most commonly occurs when seeds are started in cool, wet soils. Seedlings affected by damping off will often look healthy, but shortly after they emerge, they will collapse at the base of the stem and die (the pathogen infects them at or below the soil line). Unfortunately, nothing can be done once plants are infected, and they will usually die. Once plants produce true leaves and a more developed root system, they are far less likely to be infected.

Why aren’t my seeds germinating?

If you are using seeds you have saved from previous years, do a germination test before planting them. If the germination rate for your seeds is 70-90%, you should have success starting them. You’ll probably want to put more than one seed in a cell and thin to ensure you don’t end up with empty cells. If fewer than 70% germinate, it may be best to purchase new seeds.

Another reason seeds may fail to germinate is if they are planted too deep. Some plants like lettuce, dill, snapdragons and coleus need to have their seeds exposed to light in order to germinate. If these seeds are planted too deeply, they won’t germinate. When planting these types of plants, sprinkle the seeds on the surface of your growing media and gently press them down. If you’re not sure how deeply seeds need to be planted, check the seed packet for instructions on how deep to plant.