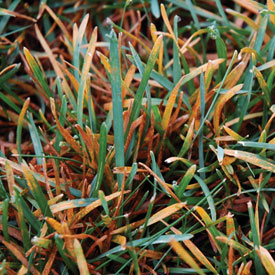 U of I Extension Office

If you’ve been walking in turf grass at all recently there is a good chance that when you’re done your shoes will look like they are covered in rust. Rust on turf grass can be a common occurrence in lawns this time of year(late summer). It appears as an orange or yellowish-orange powder on grass leaf blades. It typically develops on lawns growing slowly. Since almost all turf grasses grown in yards in Illinois are cool season, this is the time of year (summer) where we see reduced growth. Overall, the turf may assume a yellow, red, or brown appearance. Close examination will reveal the pustules, which easily rub off on your hand.

Rust can be controlled through sound turf management. Begin by choosing a quality turfgrass seed blend of several cultivars of the species desired for the site. Resistance to rust can vary according to the race of the disease present. A diverse turf stand helps combat rust and numerous other turf problems. Maintain lawns through sound watering, mowing, and fertilizing practices. If watering, water early in the day so the grass dries quickly. Manage thatch if it is over ½ an inch thick. Increase vigor with an early fall nitrogen application, but make sure you don’t overdo it, no more than 3 pounds of nitrogen per 1000 sq feet should be applied per growing season. Soil phosphorus and potassium levels should also be checked through soil testing. Also, assure good airflow over the site and light penetration by pruning trees and shrubs in the area near the lawn.

Because lawn rust is mainly cosmetic, fungicides are rarely suggested on home lawns for rust control. Instead, focus on cultural practices to improve your lawns health. When rust occurs in late summer, improved growth conditions of early fall will often get lawns growing more vigorously and the rust will fade away.