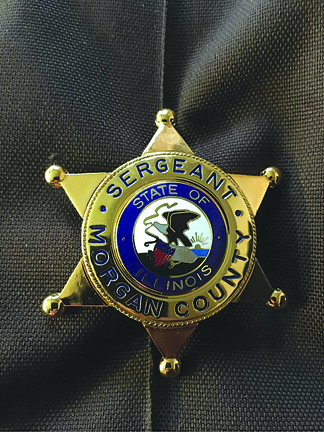 Best Part of the Job: Getting to meet new people. I’m a pretty outgoing person and I like to talk to people, so it works out well.

I would have never expected to have met the variety of people that I have.

Worst part of the job: Anytime there is a full moon. Haha!

Overall comments / thoughts about MCSO: Growing up in Chapin I have always wanted to give back to my community. This led me to joining the National Guard when I was 17. At 19 I joined the Chapin Volunteer Fire Department for a while until I had military obligations. I then got my EMT License in 2012 and did that until my law enforcement career began. With working at the MCSO I’m still able to serve my community. Plus with Morgan County being 572 square miles I’m able to see a lot of neat things.

Best Part of the Job: Being able to solve a crime or to bring some resolve to a situation is a great feeling. The public comes to us for help and if we are able to provide that in any forma that is a great sense of accomplishment. Also, talking to the public, getting out of the squad car and having conversations with people. Humanizing the badge and showing our community that we are normal people with abnormal jobs.

Worst part of the job: Any calls to service that involve children. It is never easy to see children involved in situations that they have no control over.

Personal / Family info: I am 30 years old, only child to my parents Mickey and Randy. Raised in Auburn, Il. I have one dog, a black lab/German shorthaired pointer mix named Jodie. I enjoy hunting, fishing and the outdoors. I am also a gear head and have built and owned several Jeeps. Never been to a beach but when I do, I’m sure I could add long walks on them to my list of enjoyment.