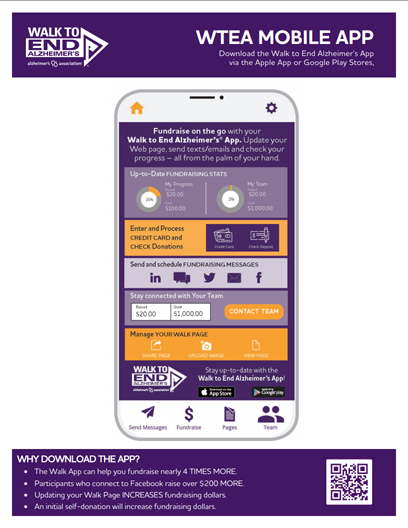 The Jacksonville Walk to End Alzheimer’s will take place this Sunday, September 12, in Community Park. Registration for the event begins at noon near the Jacksonville Area Chamber of Commerce office, with complimentary hamburgers or hot dogs, chips and water available for participants.

An opening ceremony begins at 1:15 p.m., with the walk following at 1:30 p.m. After the fundraiser, the Ferris Wheel will be open for rides and there will be games for all ages, according to Jacksonville’s Walk to End Alzheimer’s committee member Marcy Jones. Jones says, “there is so much more to this disease and many local individuals with heart-wrenching stories.”

There is no participation fee, no minimum number of team members and every dollar donated is appreciated. All ages are also welcomed to participate. Plus, for those who cannot make the event, it is possible to be a virtual team member. To sign up a team, go to Alz.org/walk and type in 62650 to find Jacksonville’s Walk to End Alzheimer’s. A “WTEA (Walk to End Alzheimer’s) Mobile App” is beneficial for teams to use in fundraising, according to Jones. The app is available via the Apple App or Google Play Stores.

Jones states, “I am involved because my dad and father-in-law both died from Alzheimer’s and watching them suffer through this hideous disease pushed me to fight for a cure. There have been no survivors of Alzheimer’s, which makes it even more difficult to hear this diagnosis for so many individuals.”