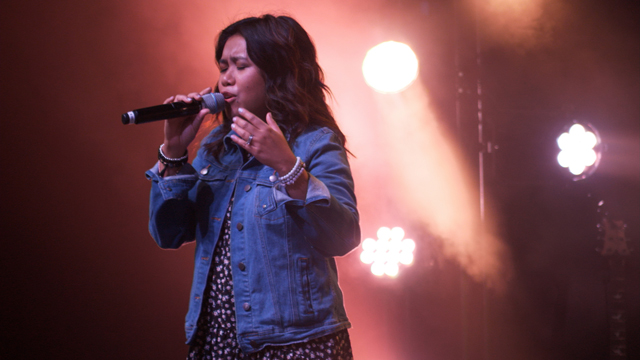 Since a young age she has always been encouraged to use her God-given talent for singing. What started as a child growing up in another country has blossomed into a weekly blessing here in Jacksonville.

Born and raised in Davao City, Philippines, Lanie Davis grew up singing in church. Her first exposure to singing was watching and listening to her older siblings sing in the choir. She got involved with the children’s choir and every year sang in the Christmas musical presentation. In 2002, along with her cousins, they formed an a cappella group initially just for fun. Eventually, people started inviting them to sing at weddings, church and other special events. For nine years the cousins sang together until she moved to the United States in 2011.

What brought her to the United States? In 2008, she found a friend online in Andy Davis from Jacksonville. The friendship grew stronger until he went to the Philippines in 2010 to officially meet her. Six months later he came back and proposed on the beach in front of her whole family. One year later she moved to the United States and they got married in September 2011. They started their married life living in Springfield but soon transferred to Jacksonville once her husband got a job at the Jacksonville Correctional Center.

In 2013 the Davises joined First Christian Church (FCC) and it didn’t take long for Lanie to start sharing her talents from growing up in the Philippines. “From the cousins singing group I was involved with, one of my cousins was a music major and gave us voice lessons,” commented Davis. “With his training and my years of actively sharing what God has blessed me with, it didn’t take long for me to get involved with the praise team at FCC.” She receives inspiration from many Christian artist, past and present. Her favorite right now is “We the Kingdom” and her favorite song is “Less like Me” by Zach Williams. She relates to the words of that song because they are so relatable to her every day Christian walk. One of the other areas that Davis was involved with while in the Philippines has spilled over to life in America, her marriage and FCC.

While living in the Philippines she worked with Compassion International (CI) for a few years as a teacher/caseworker. She would assist the children involved with CI in writing letters to their sponsors. CI was founded in 1952 and today is present in 25 countries with over 2 million children being sponsored. FCC has adopted this mission organization as one of the groups they annually support. Both Lanie and her husband Andy had the opportunity in 2016 to return to the Philippines where they were blessed to meet their sponsor child. “We went to visit her church and her house,” Davis explained. “We still communicate with her through writing letters.” CI is a Christian organization whose mission is to release children in poverty in Jesus name.

One interesting fact about Lanie that can be contributed back to her husband Andy and that is they are big fans of super-hero movies, especially of Marvel origins. The Davises make their home in Jacksonville with two wonderful kids. Lisa is six and in kindergarten and her brother Noah is three and in preschool. Both kids love singing and have a deep love for music. They come by it naturally.