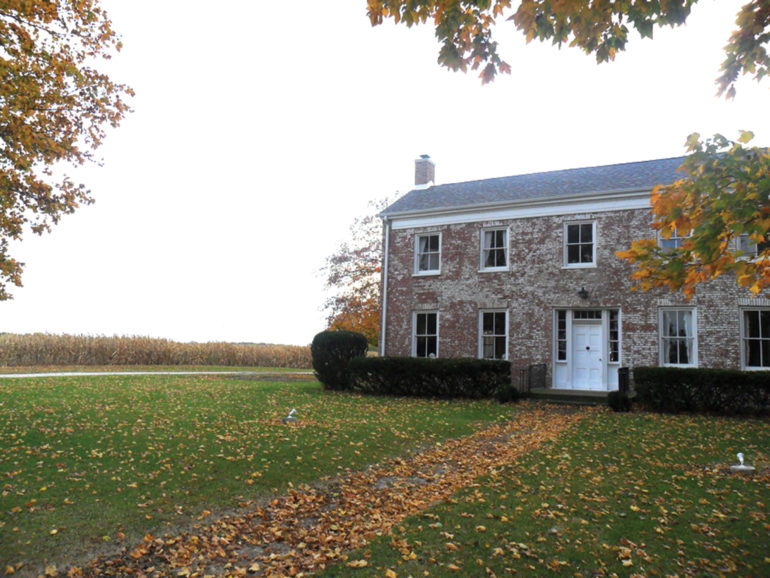 {PHOTO CAPTION} Photo/Special to The Source Newspaper
The Huffaker home, above, has become an ongoing research project for Ben Belzer to document its historical events. The home is located at Woodlawn Farm and is part of the Underground Railroad.

Ben Belzer has always liked history, but never saw himself in a career involving history, until he realized that all his extracurricular activities involved history, such as touring historical sites or reading about history. As a non-traditional history major at Illinois College, he is now immersing himself in it. From Jacksonville, Belzer’s family even has “history” – his ancestor, John Wyatt of Illinois Congress was one of the three founders of Franklin, IL.

Always in search of history, Belzer started in September of 2013 as an intern for Brian “Fox” Ellis at Woodlawn Farm, tasked with writing about the historic Huffaker home on Woodlawn Farm for the website www.historicillinois.com that Ellis had started. By the power of the pen and his historical research, Belzer created tales based on the detailed spaces of the house, creating articles on the website about the worker Mammy Blue, the view from the cellar door where slaves were to have hid, and other “Voices from Woodlawn’s Past.”

Woodlawn Farm is “a non-profit that focuses not only on the Underground Railroad’s history at Woodlawn Farm and the things that happened there, but also on the importance of the Underground Railroad in American History and why it’s so important to continue to educate in today’s world about the wrongs of human exploitation,” says Belzer. Belzer is Chair of the committee that has planned a festive fundraising event for Woodlawn Farm on Saturday, October 18; the day will be a Fall Festival and Kentucky-Style BBQ, with all the monies raised going toward the preservation and continuation of educational programming at Woodlawn Farm. The festival takes place from 10am-5:30pm on the 18th out at Woodlawn Farm and will feature blues music and educational lectures on the history of the blues by Robert Sampson, mini-tours, folk music by Tom Irwin and Theresa O’Hare (which will be focused on Central IL and incorporating a song about Underground Railroad Conductor Jameson Jenkins), a pumpkin-carving contest, monkey rope bridge, antique farm equipment on show, kid’s activities and more. There will be an open house for guests to discover the history and the gift shop will have neat memories for purchase.  Oh, and there will be FOOD! (That’s the tasty Kentucky-Style BBQ portion of the event name.) During an archaeological assessment of the grounds in the mid-2000s, many pig ribs were unearthed, supporting the belief that pig was eaten about three times a day, noted Belzer. Pigs were used for many reasons from meat or lard for cooking to candles and soaps in the home. An 1850 census noted that Mr. Huffaker had 60 head of swine on his land. Belzer says the committee wanted to entwine these pieces of history with the event and the fact that the Huffakers were from Kentucky, which is why they decided on Kentucky-style bbq for the main course. Admissions to the Farm is $4 per person and the option for a meal, which includes a smoked, pulled pork sandwich, baked beans and chips is $5 per meal.

The Fall Festival and Kentucky-Style BBQ at Woodlawn Farm will be a great opportunity for guests and history lovers alike to see the new carpeting in the Huffaker home (which was donated from the historical Edwards house in Springfield), gaze upon all new renovations, visit the gift shop, discover the grounds and take a tour of history.  If you’re not able to make it to the event on Saturday, October 18, anytime from 10am-5:30pm, but are interested in donating to Woodlawn Farm, checks can be sent to: MCHS/UGRR, P.O. Box 116, Jacksonville, IL 62651.