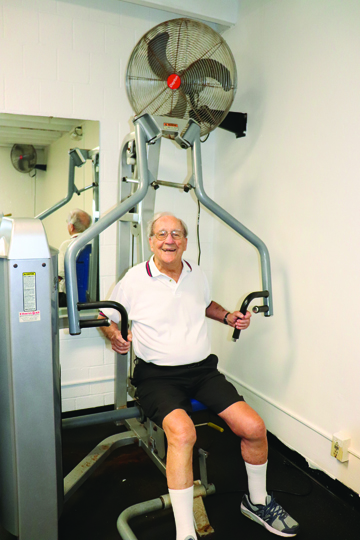 With a physical education major and lifetime of continuous athletic activity, Walter Matthews manages to stay young in mind and body.

On October 2, he celebrates his 95th birthday. For his birthday, he wants to encourage others to join the Bob Freesen YMCA and find what he has – he says it is not only a workout facility, but a fitness family. He is the poster person, showing that exercise keeps people young. In fact, he was running outside every day until just a few years ago!

Born and raised in Kirkwood, Missouri, Walt says, “It was during the World War II that I started at to the University of Missouri.” After one semester, he was drafted. He served as a United States Army paratrooper and was in Japan when the first troops arrived there. He said he was very lucky because he didn’t see any combat and was able to get an education from his service also.

Walt recalls, “After serving in the war, I came back for one semester at University of Missouri, but it had changed so much! I wanted to go back to the small school where I started, so I picked Southeast Missouri State University. Of course, I also really wanted to participate in football and track, and I majored in physical education.”

While there, Walt met Dorothy Runnels, and they were married Nov. 24, 1948, in Cape Girardeau.

Walt went to work as a teacher in St. Louis, “but I decided it wasn’t for me,” he explains. He also worked in the shoe business for a while before he and Dorothy moved to Jacksonville, and he began working for Mobil Chemical Corporation as a supervisor in various areas for 30 years. Dorothy, who worked in the Morgan County Treasurer’s Office for many years and later was a realtor for Grojean Realty for 15 years, died December 2016. They were married 68 years.

When Walt moved to Jacksonville, there was no YMCA (Y) here in town and he still loved to run and exercise regularly, a lifetime habit. “Some of us guys used to go over to Springfield and work out over there,” he remembers. Then he became a charter member of the YMCA in Jacksonville when it was built in 1968. “I was ‘Layman of the Year,’ I was president of the board, I was very involved in the Y,” says Walt proudly. “I also went to the Y to work out every day, even when I was working. I’d get out here at noon time and get a quick workout in then go back to work.”

Walt is still at the Y six days a week these days. He currently has (two) 35- to 40-minute routines. “On one day I will do cardiovascular, which is through a recumbent bike,” Walt explains. “Then the next day, I will do machines for upper body and for back exercises.” He also makes sure to stretch before and after his exercise.

Walt lives that it took a November 2018 study from the Human Performance Laboratory at Ball State University to find out, that the participants over 70 who exercised regularly for years had the hearts, lungs and muscles that were in equivalent shape to those of people in their 40s.

“I think exercise is important, not only for your body but for your mind. I think it helps slow down dementia. I read that it does,” he says. And Walt usually follows his YMCA routine with a trip to the Jacksonville Public Library to read the newspapers.

“I’ve always been into physical exercise. In 1947, when nobody really ran, I ran an AAU 15-mile race in St. Louis and got a third-place trophy,” remembers Walt. Then Walt ran the 2-mile in college track. He says he always kept running, “I used to run here [the Y] at noon time when I’d come from work, no matter the temperature … if it was 100 degrees, I’d be out there running around the Y property. But my knees don’t let me run any more. I don’t even walk distances anymore, but I do sit on the recumbent bike and get my heart rate up.” He keeps moving!

Bob Freesen YMCA Executive Director Mary Henry says she’s known Walt since she was young and he has come to the YMCA every day since she has known him. His dedication to the YMCA has been unwavering. Henry says, “If you don’t see Walt, you worry. He is that dedicated. You can set your clock by him. COVID-19 was extremely hard on him as it was for everyone, but it took away this very regular safe and healthy outlet for him.”

Walt says he hasn’t had any knee surgeries or anything. He says, “I had AFib and had a pacemaker put in about 15 years ago. AFib, or Atrial fibrillation, is an irregular and often rapid heart rate that occurs when the two upper chambers of the heart experience chaotic electrical signals. The result is a fast and irregular heart rhythm. The doctor installed a pacemaker to assist him, and Walt says, “I was just at the heart doctor this week and she said, ‘You’re in good shape.’”

Walt credits all that and more to regular exercise his whole life. He has a great appreciation for the YMCA, because again – it is not only a fitness center, but also a family. He believes in the YMCA mission to assist this community with a history that goes back to those original charter members like himself. The commitment to membership, sports programs, plus afterschool and summer camp assistance for all has helped the Y be of assistance to others in our community. This assistance comes through scholarship assistance, donations and grants.

“It is hard to compete with some of the low-cost facilities that have come in lately, but by joining the Y, members help support so much more than just a fitness club,” exclaims Matthews. “When membership grows, it helps a child learn to play flag football, learn to swing a tennis racket, learn to swim, or have a safe place after school or at day camp in the summertime.” So many skills learned at the Y are skills that can assist children to be healthy and safe for a lifetime.

Walt’s own children grew up at the Y and memories and impressions have lasted a lifetime for them also. Each remembers many Y experiences from childhood thanks to their father. His son Ted learned to swim in the pool. “I was quarterback of youth football my team in fifth or sixth grade. There was lots of talent on the team, but the best player was Bobby Bettis. All I had to do was throw in his general direction and he’d be in the end zone in no time,” Ted Matthews recalls.

Daughter Susan (Matthews) Golden says, “The most memorable experience for me was that my first paid job, outside of babysitting, was as a ‘receptionist’ on Saturdays at the Y during my senior year of high school! The assistant director at the time knew me from my involvement in Tri-Hi-Y, a group of female classmates at JHS who used to organize Sadie Hawkins dances in the building adjacent to the old building downtown, and then Jerry … I think his name was … asked me if I would be interested in working on Saturdays at the front desk. I enjoyed that opportunity immensely. The Y has been an integral part of the Matthews family history for over 50 plus years!”

Peter Matthews, who also played all the team sports and spent summers at the Y, says, “But the biggest memory I have of the YMCA was taking a week’s vacation with Mom and Dad to the YMCA Camp of the Rockies in Colorado. I believe Dad was on the board at the Y and he had to attend a function at the camp when I was about 10. We spent a week at the camp, and it was great. I remember thinking what a wonderful place Colorado was. I loved being in the mountains. I was fascinated by the wildlife we saw and being surrounded by so many trees. It was so different then central Illinois. I didn’t realize it at the time, but I believe I made up my mind on that trip that I was going to end up in Colorado and I’ve been here since 1994.”

“These days, at age 67,” says Janet Matthews, “I am still active and in good shape. I use a Silver Sneakers pass to work out at my local Y in St. Louis, Carondolet Park, and I play a fair amount of pickleball. If I live a long life like my father, I hope it continues to be an active one.”

In addition, Ted Matthews recalls, “My dad taught me handball and racquetball. I was not able to ever beat him solidly until I was in college, and he was in his 50s. He was very good.” Much like his father, he ran long-distance at the Y during his junior high school years and said he had a respectable time in the 3-mile race.

Walt’s family donated to the Y’s youth scholarship in his Walt’s name when their father turned 90. For Walt’s 95th birthday celebration in October, the siblings plan another donation in his honor. Courtesy of Walt’s family, the Y can give membership assistance to area youth and start healthy lifestyle habits for area youth.

Happy birthday, Walt Matthews! May you have many more years of good fitness in the years ahead. Thanks for being such an inspiration in everyone’s fitness journey, Walt!