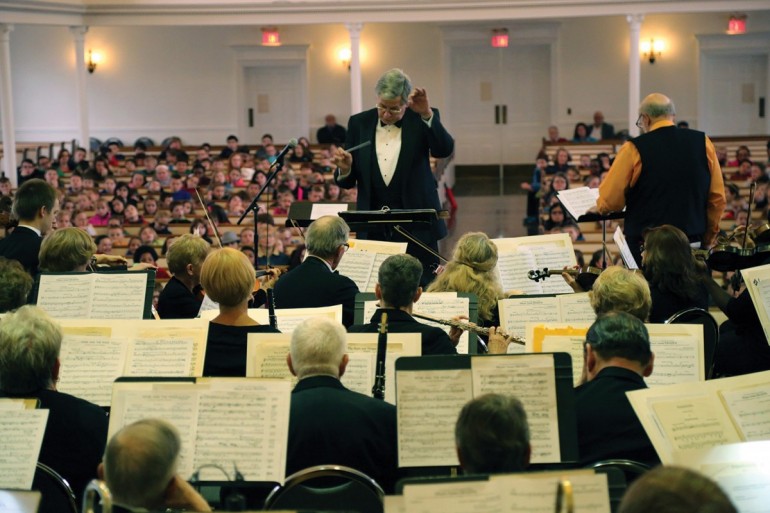 Hundreds of area students listen to Jacksonville Symphony Orchestra, under the direction of Dr. Garrett Allman, and Ken Bradbury during “Peter and the Wolf.”

On March 24, I attended the 10 a.m. Jacksonville Symphony’s Youth Concert. I really love our Symphony Orchestra and enjoy going to concerts on a regular basis, but the idea of attending a concert with a room full of third, fourth and fifth grade children was not appealing to me in the very least. I could only imagine them being noisy, disruptive, and disrespectful. I couldn’t have been more wrong about what was going to transpire: the hall was quiet, the audience paid attention, the room was ready for their music. It was pretty spectacular.

Dr. Garrett Allman, the Music Director and Conductor, told me that when he started his tenure with JSS in 1981, the youth concerts were performed on Sunday afternoons in local school gymnasiums. He wasn’t sure how long this had been going on, but it wasn’t a very well attended event and he knew that there must be a way to bring the music to children in a more productive and conducive manner. The result is what I witnessed on the 24th .

The concert, opened with the rousing, “American Salute” to pay tribute to the 150th Anniversary of the end of the Civil War. The applause was sincere and enthusiastic. Two pretty special moments happened when Ken Bradbury came forward and narrated two pieces. The first was a piece I had never heard before, the charming and engaging, “A Brief Dialogue Between a Bear and a Nightingale” by Umberto Bertoni, that is performed as a duet with contrabassoon and piccolo. Mr. Bradbury and the Orchestra followed up with one of my favorites as a child, Prokofiev’s “Peter and the Wolf.”

Palpable enthusiasm flooded the hall when the Symphony played a medley of songs from Disney’s “Frozen.” The silence was gone, giddy giggles rippled whenever the orchestra would change tunes and suddenly they’d recognize which tune was being played, and then the singing along began. It was magical to see the the conversation between the orchestra and the kids through the music! Dr. Allman said that the Youth Symphony Concert is always the highlight of each Season. Ann Collins, a violinist, said that she always looks forward to seeing the way the kids interact with the music. Cathy McGuire, bassoonist and the contrabassoon for the duet, told me that it never gets old coming to play these concerts and she enjoys every second of it. Ken Bradbury said that watching the kids react with each other and the music was the best kind of payment around. I got to interview a group that was waiting for their bus to take them back to New Berlin and was floored at the amount of kids who are already playing some of the instruments in the orchestra. They were genuinely excited about the music they had just heard.

Thank you Jacksonville Symphony Society for introducing quality, live, orchestral music to our children! Thank you Bound To Stay Bound Books, Kiwanis Club, Ameren Illinois, United Way, Rotary Club, and Pilot Club for underwriting these concerts so that the school districts and may attend free of charge! Thank you to our area third, fourth, and fifth grade students and their teachers for restoring my faith in our future generations’ music appreciation!