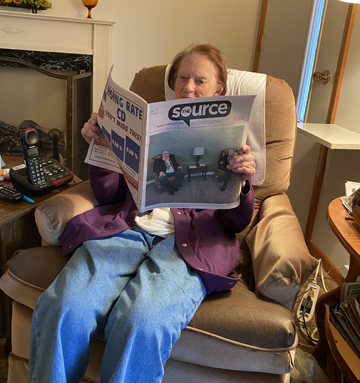 Jacksonville native Marie Robson turned 103 on August 7, 2022. She says she always looks forward to faithfully reading The Source Newspaper each week. Naturally, she is well deserving of a feature after all these years — thank you, Marie Robson, for your support!

In her home, Robson has a stack of The Source Newspapers beside her chair to read between working on jigsaw puzzles that she had spread out on the table.

Robson comes from a farming family where they farmed cattle and hogs near Franklin and is one of six children. Robson attended Jacksonville High School where she met and later married her high school sweetheart, Kenneth Robson. The Robsons had three boys, David and twins Daryl and Dale. Marie and Kenneth Robson were married for over 50 years, and she is the lone survivor of her immediate family.

Robson stayed at home to raise all the boys until they were in school, then went to work at Woolworth’s in Jacksonville on the downtown square for over 25 years. She retired from Woolworth’s five-and-dime two years before they closed their doors. Robson says, “I enjoyed it very much!”

At one point in their lives together, her husband decided he was tired of farming, so he took up amateur radio, which they both enjoyed doing together. Amateur radio quickly became a hobby of theirs. Also known as ham radio, it is the use of the radio frequency spectrum for the purpose of non-commercial exchange of messages, self-training, private recreation, sport radio and emergency communication.

Robson also loved to quilt and has made 19 fully completed quilts in her lifetime. She recalls, “When I was still able to, I enjoyed my quilting and doing yard work and all my flowers. I like to keep a clean and tidy house, I guess — it is very important to me.”

At the age of 103, Robson still has a valid driver’s license and drives from time to time down the street where she gets her hair done. She enjoys the times her grandchildren come visit around the holidays and spending time with her two daughters-in-law that check in on her regularly.

Robson has seen a lot in her lifetime. She notes the changes that stand out most for her, saying, “I guess the many changes of the downtown square.”

She continues, “At the time Kenneth and I were married, we had no electricity but lived by kerosene lamps and candlelight. And we had no indoor toilets or a running bathtub. We got our first indoor toilet and bathtub when our first child was born. We were the first in our neighborhood to have a television and everyone down the street would gather at our house on Saturday nights to watch wrestling … my doors were always open.”

Robson’s memories bring back her high school days: “All the people and the friends I made, these were my happy days back then. All my education came from high school and back in those days women didn’t go to college like they do now.”

So, what’s the secret to a long, full life? Robson shares, “Oh … I guess my yard work. It was my exercise. I had so many flowers.”

Her advice to others and the next generation is simple: “Don’t worry, take care of yourself and be active.” Happy and healthy 103, Marie Robson!