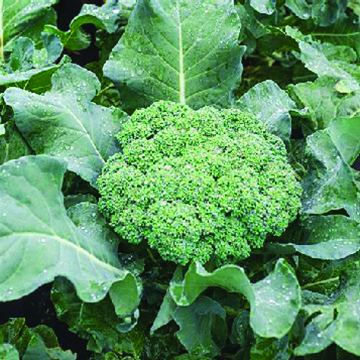 With the turn of the new year, it seems to be a tradition to declare it the year of “fill in the blank.” So far I’ve learned 2023 is the Year of the Rabbit according to the Chinese Zodiac, Pantone named Viva Magenta as the color of the year, Rudbeckia ‘American Gold Rush’ is the perennial plant of the year according to the Perennial Plant Association and Merriam-Webster reflectively assigned words for 2022 such as “gaslighting,” “oligarch” and “codify.”

This tradition of arbitrarily assigning something to a year is usually of little interest to or influence on me; however, discovering that the National Garden Bureau deemed 2023 as the year of the broccoli gave me reason to reconsider my ambivalence. Broccoli is one of my favorite vegetables to grow and eat, so allow me to indulge.

Broccoli (Brassica oleracea) is a member of the mustard family, which includes other familiar garden plants such as cauliflower, cabbage, pak choy and kohlrabi. Native to the Mediterranean region, broccoli has been cultivated by civilizations for thousands of years. Through international trade, broccoli was eventually introduced to England in the early 1700s. It began being commercially produced in the United States around 1920, and emerged as a significant crop after World War II.

Broccoli is a nutritional powerhouse and is a good source of vitamins and minerals that contribute to health. A few key nutrients and their function are outlined next in an effort to convince more people to grow and enjoy the vegetable.

Broccoli can be consumed raw or cooked. If cooked, the availability of nutrients may change. Depending on the cooking process, some nutrients may be more available while others may be reduced. Regardless, there are many ways to incorporate broccoli into a meal.

Broccoli is a cool season crop that can be planted a few weeks prior to the average frost-free date and again as a fall crop. It is best to plant transplants rather than direct seed in the spring when soil temperatures are above 50 F. To grow your own transplants, sow seeds four to six weeks prior to the time of outdoor planting. Seeds can be direct sown into soil in late summer for a fall crop.

Broccoli and its relatives should be part of a crop rotation program to help minimize the threat of pest and disease issues which means planting broccoli where related crops have not been grown in the previous years. Common pests include cabbageworm, aphids and more.

Broccoli prefers soil conditions which are abundant in nitrogen, well-drained while providing consistent moisture. An organic or well-balanced fertilizer can be incorporated into the soil a week prior to planting or at planting time to provide necessary nutrients. As with any garden plant, regular monitoring for pests and diseases can help inspire a proactive approach to care.

In terms of eating vegetables, the specific plant part consumed varies depending on the species. For example, carrots are the roots of a plant, celery is the stalk, tomatoes are the fruit, spinach is the leaf, green beans are the pods and peas are the seeds. Broccoli is harvested as a floret, or the underdeveloped flower head. Harvest should occur when the head is fully developed with flower buds, but has not started to open. The central head is the largest and first floret to be harvested but side shoots will develop in the weeks following the first cutting. Allow these to develop for a longer, more productive harvest season.

Good Growing Fact of the Week: Breeding programs have produced broccoli cultivars that are purple in color. Cultivars include ‘Jacarand,’ ‘Purplelicious’ and ‘Burgundy.’