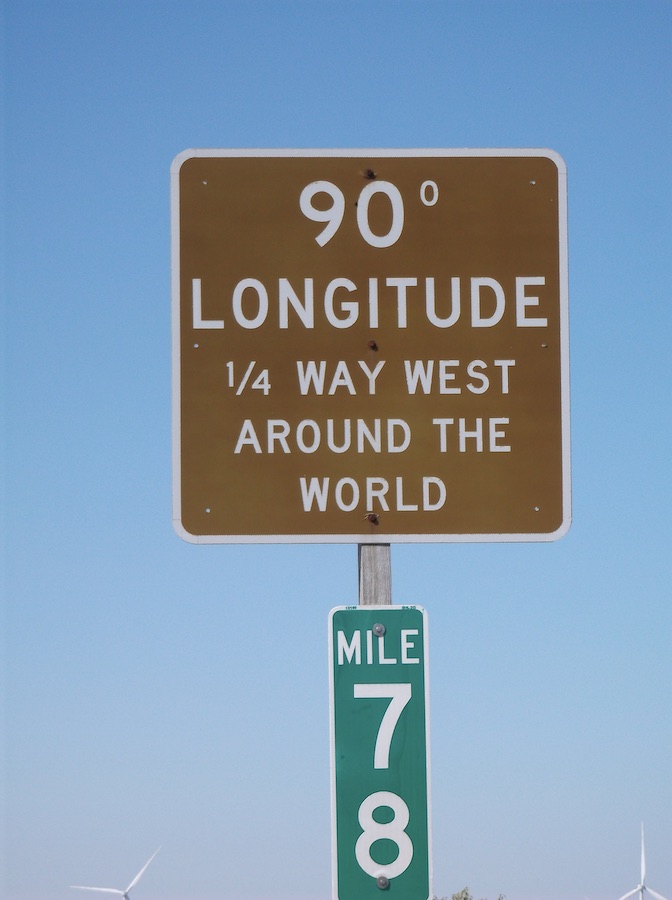 A small brown sign stands on the side of the road two miles east of the Alexander exit on Interstate 72. The message on the sign reads, “90º longitude ¼ way west around the world.” The sign reminds us of one of the most difficult puzzles to afflict the human race since we started wandering around. How many times while traveling have we asked ourselves, “Where are we?” The brown sign on I-72 offers a glimpse into a man-made system designed to inform travelers where they are on the surface of the earth.

Knowing where you are on land, say just east of the Alexander exit, is pretty easy — you have landmarks to guide you. However, out on the emptiness of the ocean, determining where you are is a much more difficult problem. Latitude, the measured distance north and south from the equator, had been determined by sailors and theorists as ancient at Ptolemy. So, explorers like Columbus had at their disposal a crude method of determining how far north or south they were, when there were no landmarks to guide them at sea. By determining the angle of the sun above the horizon at noon, on a crude precursor of the sextant, they were able to get a pretty good estimate of their location north to south. Still, that doesn’t help the traveler on a course east or west. The problem of longitude is a difficult one. The angle of the sun above the horizon at noon offers little help in determining location east or west. When Columbus chose to go to the Indies by sailing west, he had some idea where he was relative to the equator, but his mission was to head west, and he had no real way of determining where he was as he sailed across a featureless ocean.

Longitude is hard to determine because the earth turns on its axis, and every place on earth experiences a 24-hour day with each 360-degree turn. In his book, “The Discoverers,” Daniel Boorstin writes, “As the earth turns, it brings noon successively to different places. When it is noon in Istanbul, it is still only 10 a.m. westward at London. In one hour the earth turns 15 degrees. Therefore we can say that London is 30 degrees longitude, or two hours, west of Istanbul, which makes those degrees of longitude measures of both space and time.” To know where you are, to know your degree longitude position, you first must know what time it is. By establishing what time it is, in the port from which you sailed, and then sighting noon while at sea, you can count the difference in hours and determine the degree of longitude of your position, from the port that you sailed. Nice trick, except in 1492 Columbus didn’t have a shipboard clock that could remain accurate in a ship cresting waves at sea. Accurate mechanical time pieces were virtually nonexistent to any sailor of the time. In fact, it would be another 244 years after Columbus’ voyage, before a workable shipboard chronometer would be invented to determine longitude at sea.

The sign on I-72 indicates that you are ¼ of the way west around the world from the prime meridian, which runs through Greenwich, just outside of London, England. October 13 is the publication date of this issue of The Source. On this date in 1884, Greenwich was established as the universal time meridian of longitude … something to think about as you drive by Alexander on I-72.