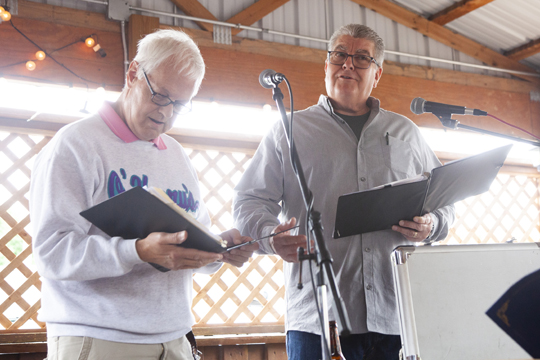 Friends gathered in the beer garden at 214 N. East St. on the afternoon of May 22 to celebrate a milestone. Forty-five years ago, ownership of Bahan’s Tavern passed from the Bahan family, which had owned the tavern since 1880, to two recent Illinois College graduates, Rob Vidakovich and Mark Frech. Some years later, Frech left to become chief of patronage and later director of the Illinois Department of Conservation in the Thompson administration. Rob Vidakovich remained as the sole proprietor of Bahan’s Tavern.

I remember going to Bahan’s when I was a student at Illinois College (IC). Through the years after graduating from IC, I went off to graduate school, traveled with Charlie Bellatti in the press and publicity department of Carson & Barnes Circus, began a screen printing business (Hole in the Wall Screen Arts), and taught college classes at Lincoln Land Community College. Throughout my checkered career, Bahan’s Tavern, operated by Vidakovich, was always there — a place to celebrate, a place to commiserate, a place to meet with friends. One can jokingly imagine the number of world problems solved over a beer in that little building on North East Street in Jacksonville.

During the 45th anniversary celebration on May 22, Dave Westberg and Bruce Surratt recounted the names of all the known bars and taverns that have either gone out of business or at least have changed their names in the last four and a half decades. Through it all, Bahan’s has remained Bahan’s. Jacksonville Mayor Andy Ezard also made an appearance, reading a proclamation which, among other things, announced that May 22, 2022, was to be Rob Vidakovich Day.

A good tavern is not just beer and food, it’s a place to meet friends, renew acquaintances and converse. Good conversation may be a dying art, but to my mind conversation is the life blood of a good tavern. People from all walks of life can be found at Bahan’s, discussing everything from sports to politics or business, in conversations among academics, electricians, businessmen, plumbers, lawyers, teachers, laborers and clergy, and every combination in between. The 45th anniversary party on May 22 was an illustration of this. The beer garden and inside were packed with people who came out to congratulate the proprietor and his family, and to meet again with old friends. It was an alumni event I was actually looking forward to, and I wasn’t disappointed.

Presiding over the last 45 years of successful tavern ownership has been Rob Vidakovich, the person who sets the tone for a place so many people think of fondly. A few years ago, a cousin of mine and her husband were traveling through town, and we decided to go to Bahan’s for their famous Thursday taco day. We sat in the beer garden, enjoying our meal. Rob — an owner who is not afraid to step in himself to either tend bar, work in the kitchen or take care of customers — waited on our table. When asked for the bill, he went inside and came back out with a full cash register roll in his hand, saying to my cousin’s husband, “He’s your bill.” That kind of fun sets the tone for this family-friendly eatery-drinkery. Many establishments come and go, but there will only be one Bahan’s.