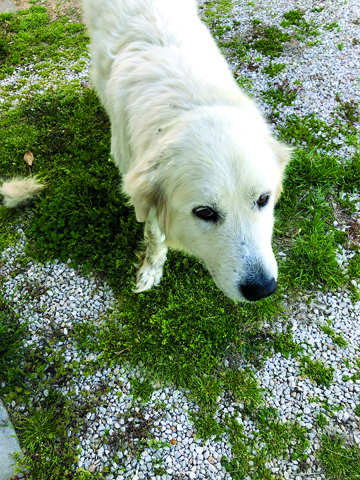 On the evening of Tuesday, April 13, area UPS driver Max Brune of Jacksonville says, “I was working, got done making a delivery at this house and just happened to look over in these holes and thought, man, that looks like a dog in there … I got out and pulled him out and [she] wasn’t doing anything … I mean, that dog was broke.

That dog ended up being “Lucy,” a nine-year-old Great Pyrenees. She was found on the south side of County Line Road, just west of Queens Road in Scott County.

That dog was indeed lucky. According to Brune, “Nobody else could see it. Because my truck sits up so high, it was lucky I could see [her]. I mean part of our training [as a UPS driver] is to be observant; if I wouldn’t have been paying attention, the dog probably would have died.”

Brune says he carries dog treats with him normally, but this was not a situation in which he could use them. The dog was “up to its back in water,” with just its head above, explains Brune. He could see where the mud had dried around her from her previous movements and could see claw marks where the dog had tried to escape out of a hole he estimated to be four or five feet deep.

Brune says, “I didn’t have a blanket or anything, so I sat with [the dog] for a while.” A neighbor pulled up and because there was nothing more for Brune to do, he continued on his route.

Because of Brune, the incident was reported to Scott County Sheriff’s Department dispatch around 7:05 p.m. Deputy White was en route at 7:12 and on scene at 7:24 that evening. White says, “I found the dog pretty much not in good health, not very alert … I believe that hypothermia was probably setting in. So, I grabbed a thermal blanket and tried to bring it back to temp; it was very cold to the touch. I’d say after about 15, 20 minutes, her head started sitting up and her core was warming.”

Upon arrival, it was only White and the dog. He was later joined by Nate Fearneyhough, an emergency responder for Scott County Animal Control (though not a county employee, Fearneyhough was close and able to respond at the request of animal control), and Clint Jones, part of the family who owns Lucy. White says, “Me and animal control put it on a blanket and carried it into an attached garage and set it down on a blanket by a heater.

Clint Jones says his mother, Brenda Jones, is technically the owner of the Great Pyrenees, Lucy. The family is from Roodhouse and lives right near where Lucy was found on County Line Road. Clint Jones explains, “There are about 15 holes of water across the road from our house. [Lucy] was in one of them.” Clint Jones says that he and his mother close their store in Roodhouse, Triple J Meats, down at 7 p.m.; Jones was then cooking at The Triangle Bar & Grill in Woodson when he answered the call from one of his neighbors about Lucy.

He was able to make it home and assess the situation. “Now, you know the cold water was so hard on her … she didn’t intentionally get in the water,” Jones says. She’s smaller for her breed, which didn’t help her predicament. “Lucy’s a 70-pounder … she didn’t get off the ground for two days”

The veterinarian put her on an anti-inflammatory and pain medicine. “Within 12 hours of that medicine, she was doing a bit better,” remarks Jones.

“I didn’t think she was going to make it. She was so exhausted,” he exclaims. “Even now … I mean, it’s been a week and 10 days … and you can tell she’s not the same.” Jones mentions how Lucy doesn’t run her full perimeter as she did before.

Jones talks about what Lucy has endured, saying, “If you go out and run a hundred miles … I mean, that’s what I equate it to.”

Lucy had seemingly given up after being trapped down in that hole, but thanks to an observant UPS driver and the actions of White and others, Lucy is one lucky gal.