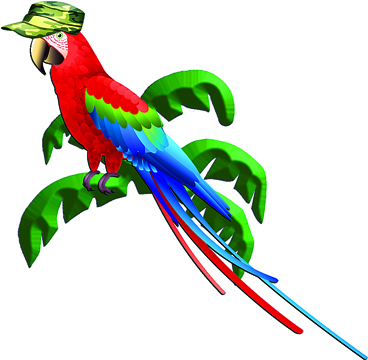 “It’s five o’clock somewhere,” said Jimmy Buffett, and as Parrot Head Night at the Morgan County Fair (MCF) is a Buffett-inspired event, it makes sense that it will begin soon thereafter.

At 6 p.m. on Thursday, July 8, the second year for Parrot Head Night kicks off, running until 10 that evening. Held in the MCF Pavilion on the fairgrounds, there is no fee to enter the event once gate admission is paid.

Marty Marr and Cheri Orris are co-chairs for the event and have co-chaired since starting an event of sorts in 2017. Neither the fair nor event were held in 2020 due to COVID-19, so this year makes their fourth year chairing together. “It originally started out titled, ‘Red, White and Brews,’ that had wine tasting options … then we decided to take a different spin on things … and decided to go with a little Jimmy Buffett – Margaritaville – Parrot Head Night,” explains Marr.

The transition from Red, White and Brews to Parrot Head Night has been positive. “It seemed to liven up … great crowd and great band. The band we had is kind of a cover band for Jimmy Buffett called The Boat Drunks … and they’re very good. They’ve got a wide variety of music. They put out a great show … it was well supported, so we’re hoping to repeat that again,” declares Marr.

A part of the night that provides extra entertainment for all in attendance is that people are encouraged to play the part of the island-loving, beach chill, fun-having “Parrot Head” by way of attire. In fact, there is a Best Dressed contest, with winners to be chosen for both couple and individual. “It was just a good night. People really bought into the night and the theme,” says Marr.

Marr and Orris share that in 2019 they gave away a trip to stay overnight in Margaritaville at Lake of the Ozarks with the help of Sherry Blair at World Travel; they did ticket pulls for the trip. Also, ACE Hardware of Jacksonville provided two Adirondack chairs that were painted with a Jimmy Buffett beach theme, which were auctioned off, the proceeds going to Morgan County 4-H. They hope to have the Margaritaville stay as an item to give away again this coming July 8.

Golden Eagle is a co-sponsor with the fair, but there is also a sponsorship package for Parrot Head Night available. For $300, it includes a table for 6 with a complimentary drink and sandwich from the pavilion for each person and the 2021 Parrot Head official t-shirt. Anyone interested in a table can call Marr at 217-473-9304 or Orris at 217-473-4068. Shirts will also be available for sale for $20 that night.

Appropriately, frozen margaritas will be flowing in the evening for as Buffett says, “If life gives you limes, make margaritas.” Not only the margs, but other alcoholic beverages will also be sponsored Golden Eagle that night. Marr comments, “They [Golden Eagle] have been a great deal of help with this event.” Wine will be available, as well.

Marr summarizes, “It was a fun event last time … it really was, I thought … but, we just want to recognize and show some appreciation to our Veterans … hope they all come out and help support this event … and the entire community for that matter. We got a lot to be grateful for in this country for all our Veterans from all the wars across time here … we just wanted to do something special … pay it forward for all our Veterans by providing a means by which somebody could join the Honor Flight system.”

Come on out because as Marr recites as a bit of a byline for the fair, “There’s no place like Morgan County Fair.” Find out more information at www.themorgancountyfair.