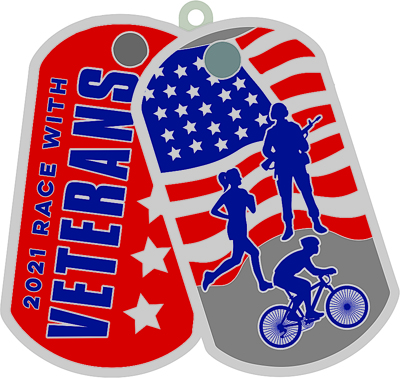 Calling all runners, bicyclists and walkers do we have a new event for you. The Race with Veterans will be held Saturday, August 21, 2021 in Winchester and is sponsored by Julian Wells Post 442 American Legion and Winchester VFW post 11524.

The event will be divided into four different routes. The red route could be up to a 22-mile bike ride and the blue route will be at least a 13-mile run, maybe more. The white route will be a 2.2 mile walk around the streets of Winchester. The most unique aspect of this race will be the green portion. This part will be reserved for veterans doing a ruck march and participants will be looking for sponsors. So much a mile or a flat donation will be accepted. The distance will be based on the individual participating. The race portions are scheduled to take approximately 4½ hours.

The red and blue routes are being finalized at the writing of this article but will include a portion of Winchester and some of the surrounding country roads. “We are working on figuring out the safest and most appropriate routes for the bicyclists and runners to compete,” stated Matt Barber, one of the event organizers. Barber is working with Nichole Mason and Rural Cyclery, owners Collin and Jackie Kuchy, to put this event on. Rural Cyclery is a new business opening in Winchester soon. They all have been working in conjunction with Winchester Fire Chief Freddie Andrews, Winchester Chief of Police Caleb Handy, Scott County Sheriff Tom Eddinger, Scott County Highway Engineer Matt Coultas, City of Winchester Superintendent John Simmons, and Illinois State Police District 20 Command to provide proper signage, personnel, and vehicles to bring awareness to the participants along all routes.

To participate in Race with Veterans there are three different levels of entry. $40 will allow you to participate in the red, white or blue routes and you will receive an event T-shirt. All those participating in the $60 level in the same routes will not only receive an event T-shirt plus commemorative race medal. The final category is called “no-frills – just exercise” and it will cost $10. The T-shirts are available for purchase at $20 apiece. The shirts have been designed by Barber and MyaLyn’s Boutique of Winchester, owners Kayla Little and Renée Chapman, will be printing the shirts. “We are in the process of securing sponsors from area businesses that will be featured on the shirts and mentioned during pre-event advertisements,” added Barber. The shirts are moisture wicking shirts and are available up to 6XL. They will also be available for sale to the general public for $20 through XL and larger sizes will be available for an additional charge. Group rates for organizations or clubs that wish to do the race together are being offered.

“We chose Race with Veterans over a couple of other ideas because our community has always been with us not just for us,” concluded Barber. The community support will definitely be on display during the event. Over the last few years, the downtown area of Winchester has seen a revitalization of businesses and events, such as Race with Veterans, bring many people from the surrounding communities into the county seat of Scott County.

Event organizers appreciate all who have stepped forward to be involved already. Peak Insurance has generously stepped forward to sponsor the event. In addition to the many local businesses putting out their welcome mats some Winchester residents are individually doing their part to help out. Wendy and Stuart Smith are going to use their individual talents during and after the race. Wendy, owner of Jax Yoga in Jacksonville, will be providing yoga and stretching for anyone who participates in any of the races. Donations she receives for her services will be donated to the event. Stuart is a local musician with several albums and is going to provide music at the beginning, during, and as the participants end the race. Local band Isaiah Christian and The Rebel Saints will be providing some entertainment during the event.

The proceeds from the race will go to help the American Legion take care of bills in conjunction with operating cost of their building throughout the year and to do more locally in support of suicide prevention/awareness among veterans. You can register for the race at www.winchesterilveterans.com under the event tab. Event participation forms are available by contacting Matt Barber at 217-414-3837 or Nichole Mason at 217-370-3121. Entry forms are also available at MyaLyn’s and through Rural Cyclery, when they open. Also contact them if you are interested in setting up as a vendor around the square.