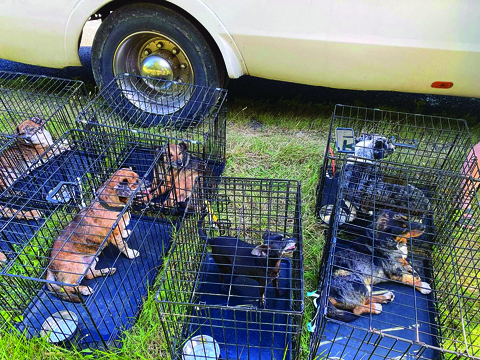 For many of us pet lovers, rescuers are heroes. They are on the front lines giving a renewed life to unwanted fur babies of the world. Thanks to social media, a crew from a local rescue, Protecting Animal Welfare Society (PAWS), was rescued themselves.

On Saturday, June 26, PAWS Founder and President Lisa Jackson was wrapping up a rescue and heading back to Jacksonville along with PAWS volunteers Connie Powell, Tabatha Evans and Betsy Smith. All in a day’s work, right? Not so fast! First, this rescue was miles away. Then, on the way home, the bus broke down.

Jackson was notified by Guardians of Rescue out of Smithton, New York about a rescue case in Tennessee. They were backed up on cases and could not take on this particular one. Guardians had been told about PAWS because of their ability to take on large amounts of small dogs. “We made the trip down to rural Livingston, Tennessee, where we were told we should be able to save 20 – 25 small dogs,” reports Jackson. “When we arrived, it was a shocking situation.” As they surveyed the scene, they were not allowed to enter the residence due to a warrant situation. Jackson and her volunteers were given permission to walk around the outside and secure all the dogs running loose.

“While walking around to catch the dogs, we discovered over 20 dogs had died and were in various stages of decomposition. It was very heartbreaking,” she adds. PAWS was able to catch seven of the nine dogs still alive. When all was said and done, they loaded up their bus to head back to Jacksonville – or so they thought.

Right outside of Nashville the bus broke down. Jackson started calling around to find other means of transportation to get all back home. This is where the power of social media came through. “Here I am busy making phone calls to try to get help and my phone rings. I hesitated answering for a split second,” she continues. “When I answered I was asked ‘Are you broke down?’ I thought how does she know that because I hadn’t put a post on Facebook about it.” On the other end of the line was a long-time supporter of PAWS, Sherry Fry, who was a good re-poster of their information on her personal site. Fry’s uncle Rick and aunt Darlene, who live in the area, happened to be driving by on the interstate and noticed a familiar logo on the side of the bus that they had seen when their niece had shared posts from PAWS in the past. They contacted Fry, who then contacted Jackson and all help broke loose, literally!

Thanks to Fry’s family, they were able to get the bus off the side of the interstate to a park-n-ride next to a gas station. Marylee Nevada showed up to help along with some friends. Between everybody they were able to get the dogs to a nearby hotel to cool off from the 90° heat, then loaded up in a transport van that transported them from Clarksville, Tennessee to Marion, Illinois. That van was courtesy of Maureen Hayes from the Montgomery County Paws Cares through Terri Cox of ARATT. Scott and Lori Trammel of Harrisburg were able to pick up the dogs and the volunteers in Mount Vernon and bring them back to Jacksonville. “The power of social media! I appreciate all of our supporters sharing our post on Facebook because this trip proved you just never know,” gratefully concludes Jackson.

PAWS is located at 400 W. Walnut St. They rely on the generous support of their volunteers to operate the facility (6 to 7 on a daily basis) and the overwhelming support given in terms of donations in supplies and money. You can join their over 30,000 followers on Facebook.