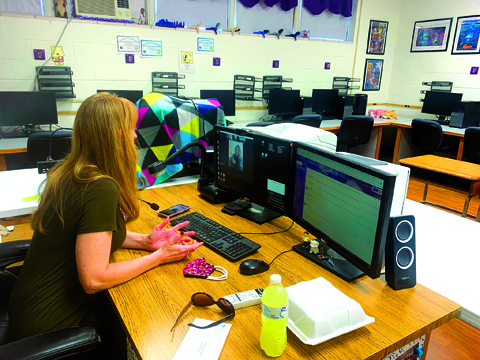 Imagine. You’ve experienced something in your life that results in missing a limb. You have hope that a solution can be found; after all, just look around at all this new technology.

While visiting with doctors and specialists, you discover advanced prosthetics that would transform your life do exist, but the price tag of tens of thousands of dollars is prohibitive. Is this where your search to improve your quality of life ends?

Unfortunately, many people deal with financial limitations when accidents or illnesses result in missing limbs. For some, this may mark the end of their search, but not for Mark Landon of central Missouri. When he realized the proposed prosthetic hand was not affordable, he began searching and eventually discovered Routt Catholic High School (RCHS) and e-NABLE, “the online global community of ‘Digital Humanitarian’ volunteers from all over the world who are using their 3D printers to make free upper limb devices for children and adults in need.”

In February 2020, RCHS teacher Tracy Ptacek attended a conference where experts introduced the e-NABLE program and showed how easy it could be for schools to get involved. “I knew our students had to have the opportunity to participate. Mr. Roscetti [RCHS principal] approved the purchase of two 3D printers, and I started the process of getting approved to be an e-NABLE provider.”

Ptacek spent the entire summer finishing all the requirements. Thanks to her diligence and hard work, she received approval. To introduce her web design students to the concept, she first had them assemble hands using 3D pieces that Ptacek had printed over the summer. Once they became familiar with assembling the hands, she taught the students about the 3D printer itself: how the software works to print the pieces and, eventually, how to design and build pieces by themselves. The web designs class was not intended to focus on 3D printing. All of this learning was taking place on days when students had extra time. They were excited and determined to master the process.

As the students were developing their skills, Landon was looking on the e-NABLE website for an approved provider located geographically close to central Missouri. In November, Landon found the Routt Catholic High School chapter and decided to call. Tracy Ptacek stated, “Mark told me about his accident, and how he had to have three fingers amputated, and I knew we had to help him … I was confident that with the innovation and motivation of the students, we could modify the original files to fit Mark’s need.”

Yet, Ptacek admits it was a bigger challenge than she realized: “When we would fix one problem, another problem would arise that we would have to design around.” In December, the class decided on two different design ideas, printed and assembled them, and sent them to Landon for his feedback. After he tried out and reviewed the different designs, he and the students officially met each other in a FaceTime call so Landon could show them what he liked, what worked and what did not. “With that information, we pressed on, resizing the fingers and reshaping the palm,” said Ptacek. “In April, we were able to send him three more prototypes and, during a follow-up video conference, we learned that we were on the right track with one of the designs.” After just a few final tweaks, Landon received his final hand in May.

“Overall, I could not be more proud of my students,” said Ptacek. “They signed up for a Web Design/Introduction to Computer Programming class, which they still managed to learn while also learning how to design and print using a 3D printer. Their compassion and service-driven attitudes made it possible for a man who lost his fingers to reacquire his grip. This project encompasses Routt’s motto of ‘Enter to Grow’ and ‘Leave to Serve’ by giving these students the opportunity to both give and receive and see the difference they can make in the world. I know that it has made an impact on me, and I hope that we can help more people in the future.”

This project was just the beginning. Routt Catholic High School owns the two 3D printers that were used for this project, and the school plans to continue to offer opportunities such as this for their students.

Colleen Doyle, Routt’s development/enrollment director and a member of the class of 2006, was especially impressed by the work being done by Ptacek and her students. She said, “Experiencing this process – seeing this project through from start to completion – is rare for high school students; I urge any area students who are interested in opportunities like this one to think about a future at Routt Catholic High School.”

Applications are still being accepted for the 2021-2022 school year and Doyle would love to talk to anyone who is interested in making Routt the high school of their choosing. To find out more information, please contact Colleen Doyle at cdoyle@routtcatholic.com or 217-243-8563, x6.