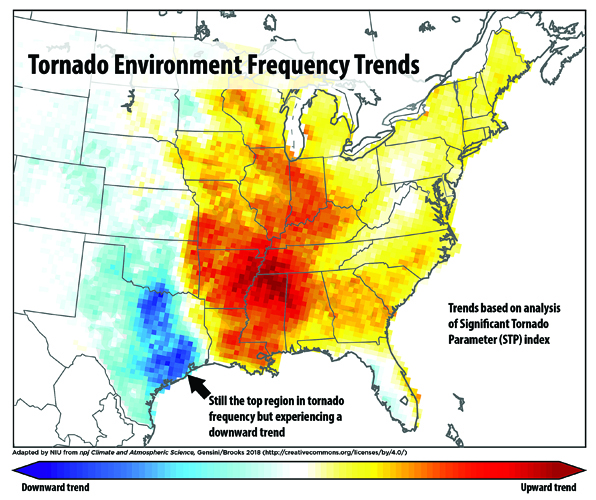 During a storm, no one likes to hear the sound of the community tornado siren or weather alert going off. Everyone living in Illinois and the Midwest has experienced those warnings, but few have experienced an actual tornado.

My closest call with a tornado occurred when I was little, and it was actually in January. Several days of weather in the 60s ended when a strong cold front came through one evening, bringing very strong thunderstorms. Three different tornadoes formed nearby within about 30 minutes of each other, and the closest one was only about a half a mile from our farmhouse. Being in a rural area, two of the tornadoes only tore up some machine sheds. The other tornado was more devastating and involved relatives.

An aunt and her husband lived about 5 miles away in a two-story farmhouse. Fortunately they had been on the lookout for tornadoes and heard it coming right for their house. As they headed to the basement, the tornado struck. While it didn’t completely destroy the house, it twisted it off its foundation. They survived. An elderly neighbor living in a mobile home a quarter mile away was not as lucky.

When we went to survey the damage a few days later, we had to trudge through snow.

Illinois has its share of tornadoes, but most people associate the larger tornadoes with northern Texas, Oklahoma and Kansas, and rightly so. This Tornado Alley in the Great Plains is where more supercell thunderstorms form, and the potential for development of destructive EF-3 to EF-5 (EF stands for Enhanced Fujita) tornadoes, packing winds of 136 to over 250 miles per hour as shown by the following illustration:

That area of strong tornadoes may be moving. A recent study by Northern Illinois University and the National Oceanic and Atmospheric Association (NOAA) Severe Storms Lab has indicated a decreasing trend in the number of tornadoes in the Great Plains, with an increasing trend in the Southeast and parts of the Midwest.

In the past few weeks, this was highlighted by several strong storm systems with tornado outbreaks in Mississippi and Alabama. This area, known as Dixie Alley, has been the location of multiple tornado outbreaks in recent history, including the Super Outbreak in April 2011.

The Great Plains still has the greatest overall number of tornadoes, but if the trend continues, that may change.

Although the research did not try to determine the cause for this trend, researchers do go on to say that people in these areas (including Illinois), should take this trend into account especially in terms of new construction and safety precautions.

If you like to read more on weather topics, subscribe to my “All About Weather” blog at https://extension.illinois.edu/blogs/all-about-weather.