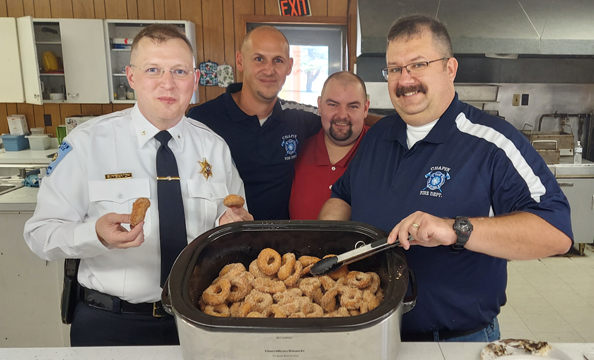 A Village of Chapin Open House was held Saturday, Oct. 1 from 1-4 p.m. at the Chapin American Legion to celebrate 25 years of their police department. There were light refreshments, plus attendees had the opportunity to meet members of the Village of Chapin Board and its departments, including police, fire and rescue.

A short ceremony was held at the beginning of the event to recognize some of the area officers and dispatchers who were involved in the March 26 vehicle pursuit and officer-involved shooting where a Chapin officer was injured in the line of duty.

Also, in good spirits, members of the Chapin Volunteer Fire Department fried donuts at the open house to give to police officers. Part of the day presented itself in an even more playful manner, as the idea was for everyone to follow around Chapin Police Chief Steve Helmich and take a picture of him whenever he grabbed another donut.

More photos from the event and awards ceremony can be found on the Village of Chapin’s Facebook page.