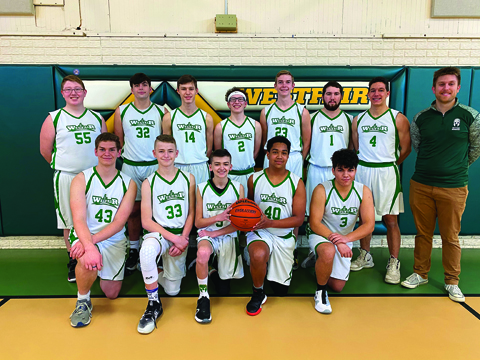 After experiencing a disappointing 2020, with their fall season being postponed, Westfair Christian Academy’s varsity basketball team enjoyed a terrific comeback this spring. We recently had the chance to talk with Jack Ford and Joel Ferraro, two of the players, as they reflected on the season personally, and for the team as a whole.

Ford shared that at the beginning of the season in January, “We had two main problems that we had to overcome: the shortness of our season and new additions to our team.” To add to that, many of the teams that they began playing earlier this year had played together all of the fall, creating a significant disadvantage for Westfair. Ford added, “Despite these problems, we went over our game plan over and over, [and we] ended up meshing together really well after some minor hiccups.” Within a few games, they had a good pattern going. Ford shared, “Any time someone was having a rough game, someone else would step up. We ended up playing very well and I was really proud of the season we had.”

Ferraro stated, “Learning to control what we could and play through what we can’t is what got us through. No matter what was ahead, which we didn’t always know, we knew where we wanted to be … we always came with the mindset to keep working and always improve.”

And improve they did, landing themselves on a podium in the small state championship for the first time ever with the Illinois Association of Christian Schools (IACS). Ferraro explained, “In an eight-team postseason tournament, we got ranked as the seventh seed, so we came in to prove we were much better than our record (1-2) and our seed showed.”

In February, they won a “come-from-behind” game against the two seed in the first round which was a big momentum builder. But, Ferraro says, “after falling to the three seed, we thought our postseason hopes were over and we would have to accept it and move on.”

However, they were given an unexpected chance to play for the IACS consolation championship. Ferraro says, “It was against a team that had squeaked by us earlier in the season, so we were very excited for the opportunity to have another chance at them with a championship on the line.”

Taking place in Pekin, Illinois, on the rival teams’ turf, Ferraro recounts, “We were down eight points going into the half. In the locker room, Coach Everetts just looked at us and told us it was up to us to win this game. It was within our reach if we dug in and wanted it more than [the other team] did. He told us there were people who doubted whether we would come away with a win here. He then said, ‘Let’s go prove them wrong!’” And so they did.

The Jacksonville boys played strong that night, defying the odds and the statistics. Ferraro commented, “Proving wrong all those who doubted us, not to mention the two postseason wins we had were against teams that had played almost double as many games as us was very rewarding.” In reward for their effort, the Westfair team secured a trophy for ranking third in the consolation championship, a first for the team and their school.

Ferraro reflected, “I think it showed who we were as a team. It seemed like so often this season we were having to play from behind, but that win to me proved who we were as men and players because we dug in and found ways to win … These last few years have been up and down for us, and it felt good to finally give back to the school and our great support group with that win.”

Ford added, “For my four years of playing varsity I had never won a place on the podium, so that was really special to me.” Now a senior in the class of 2021, Ford added, “This season, I learned how to be a better leader and example for the team. I realized after my bad attitude in my first few games that my attitude rubs off on my teammates. So I fixed my attitude and was really determined to lead my team both as a player and as a Christian.”

While a win like that is elating, what it shows is discipline and control. Ferraro shared some thoughts on personal growth during the season, saying, “I think the biggest area I grew was learning to control what I can, and face head-on what I can’t. I learned the importance of always bringing the same fight and toughness whether we’re up or down. How I play, how I’m leading, and my emotions are within my control. Things like injuries and referee calls are not within my control. While there is so much I can’t control, when I learn to counter that with the things I can control, I get better results.”

Westfair finished the season 4-4, ranking third in their conference. While it was far from a perfect year, for coming into it halfway with the challenges they had, they did tremendously well and have much to celebrate. Ferraro concluded, “We found ways to win tough games where a lot was against us. I think we have struggled in that area in years past, and we definitely improved on that, and will be looking to keep improving in that area going forward.”