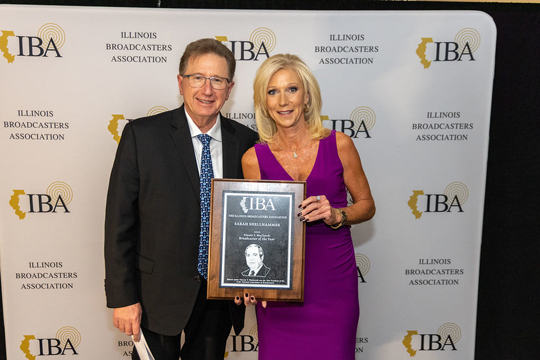 Sarah Shellhammer received the IBA Broadcaster of the Year award during the Illinois Broadcasters Association (IBA) “Night of Celebration” on December 7 in Chicago. Shellhammer celebrated this accomplishment with her two children, Tyler and Lindsey, along with all of the WJIL-WJVO staff.

The official title is the 2020 Vincent T. Wasilewski “IBA Broadcaster of the Year” award. Shellhammer is the owner and general manager of Morgan County Media in Jacksonville; she purchased her stations a few years ago after starting at the station as sales manager along with on-air duties. She has been in radio since 1989 and worked in different cities and for different radio companies. Her love for Jacksonville and for the people is the reason she and her two children have remained residents. Shellhammer is very involved with military veterans’ organizations and with animal rescue operations such as PAWS.

She said the radio stations have started several annual community events in the past 22 years, including Safe Halloween for Kids; Bottoms and Bonnets baby contest; a Veterans Day parade; Run, Walk, Remember 5K; and the Christmas parade. Still, of all the events the station has organized since her time in radio, she is most proud of the Wall That Heals, a traveling Vietnam Veterans Memorial that came to Jacksonville in June 2015.

WJIL was founded in 1962 and WJVO first went on the air in 1987. In 2013, the Illinois Broadcasters Association named WJVO the Small Market Radio Station of the Year.