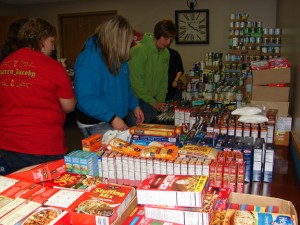 WOW!!! … Amazing, incredible, beautiful, bountiful, generous, loving, giving … there are just not enough words to express how SUCCESSFUL the food drive was at Cass County Mental Health Association. A “food war” in which agency programs competed against one another started on the first of November and culminated in the creation of food baskets Monday. The winner of the “war” was Cass County Mental Health Day Training, contributing more than 1,200 nonperishable food items. Executive Director Diana Feigl stopped officially counting at 4,003 as staff was already making baskets while more food was coming in! Most deliveries will go out tomorrow. 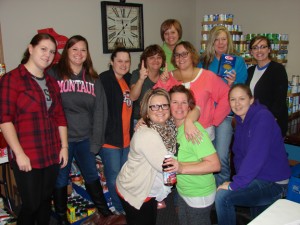 Support staff offered to put names in a drawing for a free turkey and a free ham for anyone who dropped off donations. Bill Gabbert won the turkey and Kelly Frost won the ham. THANK YOU to each and every person who donated!