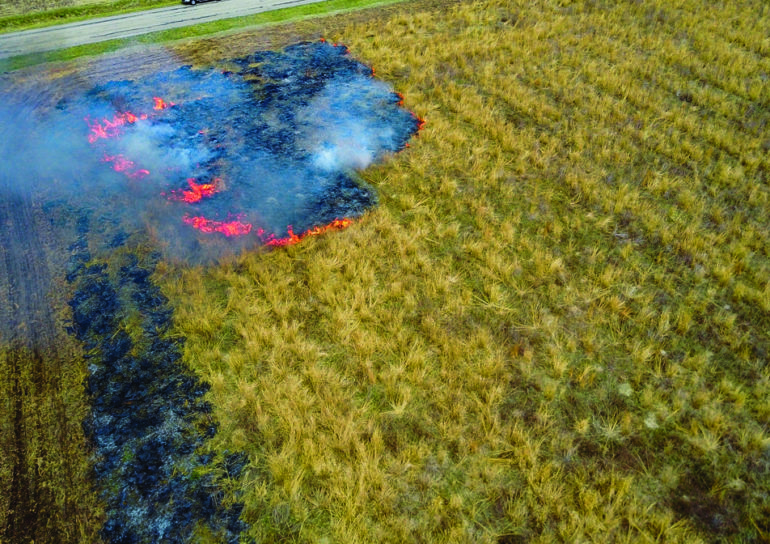 Most people enjoy seeing prairie restorations take place. After establishment, viewing a lush prairie with grasses and wildflowers is soothing to the soul.

In the early 1800s, Illinois had over 20 million acres of prairie, which had established itself thousands of years ago after the last ice age ended. The root systems of the prairies added huge amounts of organic matter into the ground, helping to create the highly productive farmland found throughout the Midwest.

Prairie is a dryland plant system. Illinois had plenty of moisture to support trees throughout the state. Why did we have so much prairie then? Two reasons. A flat landscape and fire.

Fire is a natural component of the prairie ecosystem. Without fire, natural succession kicks in, and the prairie is eventually replaced by woody shrubs and trees.

Fires occurred naturally on the landscape by lightning. The flat land we have in the state, especially in east-central Illinois, aided the spread of fires once started. However, as more research is done, it’s becoming apparent that humans also used fire extensively in the landscape.

Before European settlement, Native Americans used fire as a tool. A fall prairie burn may have been employed to funnel bison into an area for their fall harvest. A spring burn provided lush regrowth which bison liked. Sometimes it may have been used as a war tool against another group.

Today there is less than one-hundredth of one percent of original prairie in Illinois. Prairie restoration has brought back a few thousand acres, mostly in preserves and on Conservation Reserve Program lands. These acres, like the original prairie, need fire to maintain its vitality.

If you have never seen a prairie fire, it’s fascinating and scary at the same time. It burns fast and hot. Flames may reach 20 feet or more. For this reason, many people don’t feel comfortable doing a burn, and that’s a good thing. If not done correctly, these fires can become dangerous not only to those doing the burn, but to neighboring areas, and wildlife in the prairie.

On the other hand, a controlled, managed burn, done by experienced fire managers, will not only keep people and adjacent areas safe, but it will also provide escape routes for critters in the prairie to get out quickly. For Conservation Reserve Program (CRP) acres, a prescribed burn plan may be included as part of managing the prairie during the CRP contract. This will probably include the need for the burn to be done by someone that is certified in burning prairie. Cost-sharing for the burn may also be possible when a burn plan is in place for CRP.

Some of the items that should be planned before a burn takes place is creating a fire break, so fires don’t go to the edge of an adjoining area and notifying neighbors and local fire department of when the burn will take place. Burn teams will have water on hand to control fires if needed, and usually start a backfire so the fire doesn’t just race across with the wind. It is this type of burn that will keep the prairie healthy, safe wildlife, and put landowners’ minds at ease.

Seeing what Illinois looked like hundreds of years ago at least on a small scale is possible as more prairie restoration takes place. If you have a chance of viewing a prairie burn, it is a very neat experience- from a distance.