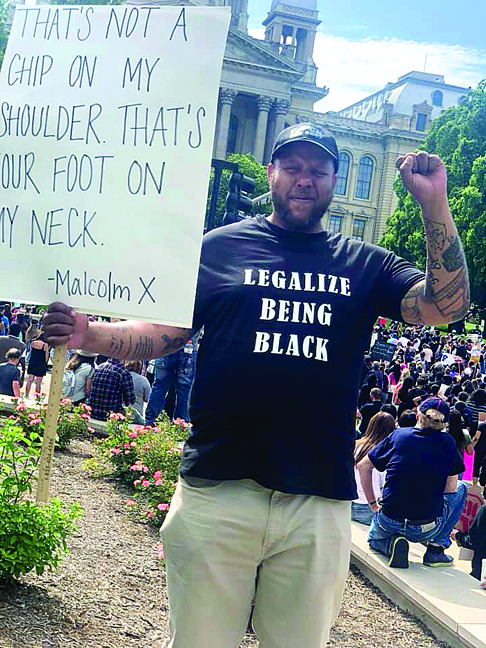 Tony Burton stood on the steps of the Morgan County Courthouse and then in front of the Morgan County Detention Facility. Along with friend Erin Tighe behind the camera, the photos taken were not simply photographs – they were imagery. In each image, strength and peace were advocated simultaneously. This is what Burton wanted to show people, he says. Be strong peaceably. Burton posted the following on his Facebook page on May 30, along with the images.

When I comply I die.

I’m not here to say all cops are bad because that’s a lie! But not killing minorities doesn’t make u a good cop. I also shared on my page the Jacksonville police department post in support of George

I’m not here to say all white people are bad because that’s a lie… and I sincerely thank and stand with the white people and any other race who understands and has empathy!

However, I am here to tell the sad truth about the treatment of minorities! America has never treated us equal! And it’s frustrating to say the very least! We march we get criticized! We knell we get criticized! We REBEL (not riot) because of this long history of injustices and not getting anything done and we’re thugs.. white people celebrate their team winning in the same manor it’s a “celebration “ no that’s a riot!! white just protested with rifles in their hand about a mask during a pandemic nobody says a word ! Were in the middle of a pandemic hardly any all Iives matter post… Black Lives Matter trends .. all the sudden all lives matter.. we try to explain white privilege… some of y’all think we’re “racist” and it’s about money … it’s about how u can shoot up a church and get detained without incident ! But George and many others die for offense (if any) not punishable by death! Stop bringing up black on black crime as if u care! The difference in black on black crime … somebody goes to jail! Not a paid leave!! My grandfather died in Vietnam fighting for a country where he couldn’t use the same bathroom as white people! One man can’t change the whole world ! But everyone has challenges how about we as black people and non racist people stick together! How about the #sticktogetherchallenge start trending in real life and on social media! It’s gonna take more than this post it’s gonna take more than a few protest it’s gonna take us to stick together if you with me repost this and your efforts ! I took these photos outside the courthouse and the county jail where I live to and a silent statement by myself ! Saying myself and others are just tired! If u stand for nothing you will fall for anything!! Thank you and God Bless!!

Also shout out to the protestors today in Jacksonville made me very proud!!

I am Tamir Rice- murdered playing outside with snowballs and a toy pellet gun.

I am Ahmaud Aubery- murdered going for a jog in my own neighborhood.

I am Eric Garner- murdered trading a square for some change.

I am Michael Brown- murdered unarmed and leaving a store.

I am George Floyd- murdered while begging for my life, cuffed, face down on the pavement and bleeding.

I am Antron McCray, Kevin Richardson, Raymond Santana, Korey Wise, and Yusef Salaam- being wrongfully imprisoned because of the color of my skin.

I am Christian Cooper- having the police called on me for asking a white person to comply with the law.

I am black and excellent and feared due to racism, hatred, ignorance and the color of my flesh