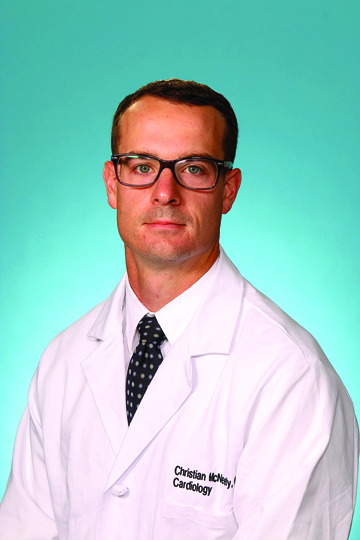 Although Christian McNeely, M.D., always loved science, he never even considered becoming a doctor until he was at the University of Illinois Urbana-Champaign (U of I) working in a research lab with people in the M.D. and Ph.D. programs.

At that point, because of his already strong interest in health science and biology, pursuing medicine made sense. McNeely chose the field of interventional cardiology so that he could help people with dire cardiac conditions.

The son of Chuck McNeely and the late Susan McNeely, Christian McNeely attended both Our Saviour School (OSS), and Jacksonville High School (JHS), where his teachers at each fueled his interest in the sciences. In 2007, he graduated from JHS and headed off to the U of I, where he majored in molecular and cellular biology. A 2011 graduate of the U of I, McNeely went directly to medical school at Southern Illinois University and graduated in 2015. He then moved to St. Louis for his residency in internal medicine at Barnes-Jewish Hospital at Washington University School of Medicine. After completing his residency, McNeely stayed on for a fellowship in cardiology. Scheduled to finish the fellowship in 2021, he will then complete an additional year in interventional cardiology.

While attending the U of I, McNeely had thought about pursuing a Ph.D. in the field of science. He says, “I didn’t really have the ambition at that point in time to do medicine.” While there, however, McNeely began working in a basic science research lab with people in the M.D. and Ph.D. programs and the notion to pursue his Ph.D. became more clear. He volunteered at a hospital and saw the opportunities outside of clinical research. He states, “I found that experience of working with patients pretty satisfying and something I could do long-term … those experiences of volunteering and shadowing … and then with this background and interest in health sciences, it made the most sense.” McNeely says it was absolute; he was sure that he wanted to pursue medicine at that point in time.

Still, McNeely didn’t have a clear path of what specific field of medicine he wanted to pursue. While working under a mentor, an interventional cardiologist, he was able to see the ability to form long-term relationships with patients. This was one reason McNeely was led to cardiology. During one of his first weekends there, McNeely witnessed what happened with a particular patient – the patient arrived extremely sick with a cardiac condition, received treatment and left with a positive outcome. He adds, “When you are a first-year medical student seeing all of that … those are the things that turned me to the field.”

The youngest of the three brothers in the McNeely family, McNeely said complaining and quitting didn’t happen often. His parents were supportive, as well, he notes. Through the rigors of medical school and the 80 plus hour weeks of residency, McNeely kept pushing through. He laughed, “Part of it may be the Irish gene, as well.”

McNeely said that many residents have at least the thought of quitting, but he never seriously considered it.

While in college, McNeely’s mom was diagnosed with cancer; she fought it for about five years, passing away when McNeely was in medical school. He was grateful to be in a medical school close to his parents, allowing him to be near her while she was ill. McNeely said that seeing his mom’s experience as a patient interacting with her oncologist is one thing that led him toward interventional cardiology, adding, “In cardiology, you still get the ability to develop long-term relationships with people. I think after seeing that in her interaction with her oncologist, it made me more heavily value that personal interaction.”

Like most in the medical field, his first year as a resident was the hardest part of medical training. It was difficult to come from little patient interaction or responsibility other than studying and test-taking as a medical student to working those extremely long hours each week and moving to a new city for his residency.

The best part of his medical training was during his residency when he met his wife, Basia Michalski, who is also a physician. On New Year’s Eve of 2019, two and a half years after meeting, they were married. “It provides a commonality of sorts to have someone to confide in things to talk about that are going on at work. It also is someone that you can relate to at home as well.” After work, they take walks in the park together to relax. As they both continue training, they live in St. Louis a few minutes from the medical center. “We’ll both be finishing up at a similar time and we’ll just see where we can both get jobs and want to live and make a decision at that point,” McNeely adds.

Not all days are the same for McNeely. A normal day could be getting to work by 8 a.m.-8:30 a.m. and getting off at 5 p.m., with a workout before or after work. Then, every week or two, there are days where he gets up at 6 a.m. goes for a run, starts at the clinic at 8 a.m., and then he goes to work at the Veterans hospital where he works all night; after a full night of work, he will go back to Barnes at 8 a.m. It is one day and a half without going home. Since McNeely is board-certified in internal medicine he is able to practice independently. On weekends and nights when he works at the John Cochran Medical Center (Veterans hospital in St Louis) he covers the intensive care unit where COVID-19 patients are currently admitted.

McNeely told a story of a man who came into the intensive care unit at Barnes and was having a cardiac arrest. It was the middle of the night and other than one nurse, McNeely was the only one around. He did one-handed CPR while getting the defibrillator on with the other hand. He laughed, saying, “That was an interesting experience.” Thankfully, the patient could be revived.

McNeely chose interventional cardiology specifically because, in that field, patients come in with cardiac dysfunction and through proper medical care, a life-threatening situation can be returned to normalcy. Part of the job is being on call. This means getting paged in the middle of the night and quickly getting to the hospital, while not knowing what the exact situation will be when arriving there. McNeely says, “The excitement of hopefully trying to save someone’s life provides more than enough incentive to keep doing that.”

Saving lives and helping others makes everything worth it.