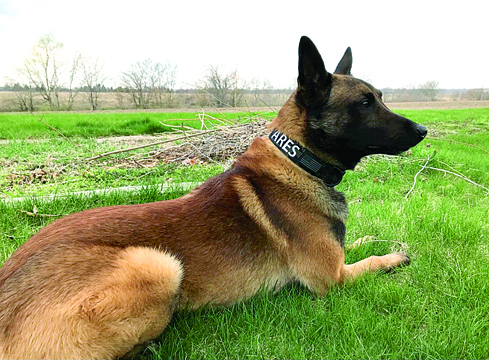 Dogs have been helping people in many different ways for years. Their loyalty, agility and strength have proven beneficial for work in police departments all over the world.

The first known Police K-9 was in 1899 in Belgium. By 1907 the United States began seeing departments utilizing dogs and since the 1940s, the Jacksonville Police Department (JPD) has had K-9 officers.

Meet Ares. A three-year-old Belgian Malinois, born in Germany and trained at the Macon County K-9 Academy, he is currently the only K-9 at JPD. Serving as Ares’ partner is officer Jordan Poeschel who has been with JPD since September 2014. After going through the lengthy selection process to be the next K-9 handler for JPD, Poeschel chose Ares from the Vohne Liche Kennels in January 2019 and they began a rigorous training period with instructor Chad Larner from the K-9 academy.

“Most training programs last 10-14 weeks. The initial training session for a K-9 team is a very difficult and frustrating period,” reports Poeschel. “When everything comes together for the first time, it is extremely rewarding.”

Resilience is the mark of a good team, and Poeschel and Ares have it.

At the end of the training, the minimum qualification for a K-9 team to become certified in Illinois is the successful completion of an illegal narcotics sniff through the Illinois Law Enforcement Training and Standards Board (ILETSB). They use 20 “focus tubes” to test the dogs on sniffing out drugs. Some of the tubes are empty; some tubes have items such as dog treats, coffee grounds, hotdogs, etc; and at least four tubes contain drugs. Each tube has holes that are not big enough to see what’s inside. To pass the certification, the K-9 team must correctly identify every tube containing illegal narcotics and provide no false alerts to any other tube. After completing the certification, K-9 teams must complete a minimum of 16 hours of training every month and re-certification has to be completed annually.

The duties of the K-9 team at JPD can vary. “Our role and responsibilities are very fluid. We are always ready to respond to any situation where we are able to assist,” tells Poeschel. “There are no calls reserved for Ares and I specifically. There are many responsibilities and jobs, however, which only Ares and I can complete.” Those responsibilities and jobs include narcotics sniffs around vehicles, inside structures, or in any other location. The team also conducts two narcotics sniffs of the vehicles and lockers at schools within the Jacksonville school district during the school year.

The team also performs other various tasks, from assisting other law enforcement agencies to doing presentations and demonstrations in the community. Ares is also often used to help apprehend suspects.

Many times, when resistant or combative subjects see or hear Ares, they reassess the situation and become compliant, which greatly reduces harm to both the officers and the subjects they are dealing with.

Some police departments that utilize K-9s have a maximum age where they will retire them, but JPD does not. Some dogs begin training as puppies but it all depends on when the dog starts connecting the dots of the training and can successfully and consistently perform the duties of the K-9 officer. As for Ares, he will serve until he no longer can do so without jeopardizing his health.