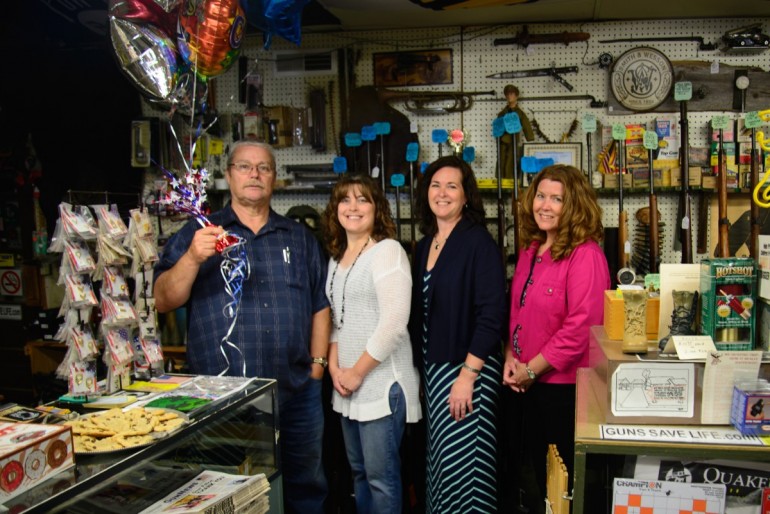 The walls of the Military Surplus Outlet in South Jacksonville would have a lot to say if they could talk. This July marked the thirtieth anniversary of the outlet’s opening on July 15, 1985. Tom Holmes, owner of the outlet, has seen trends in the economy, politics and met people from many states and countries throughout the years. He does not view his outlet as merely a business, but as what is in charge of him.

“I’m the guy the surplus store runs,” he said. “It feels alive.”

“I am so inspired by him, and what he has accomplished with this store. He built this business by himself and has run it seven days a week for 30 years,” Cathy Hansell, Holmes’s daughter who works full-time at the outlet, said. “I don’t know many others that would be as dedicated as he is. He inspires me and motivates me to work hard for what you want.”

The outlet might as well be alive. Holmes has countless memories of all that he has seen and heard at work with the outlet as his witness. He remembered those six to seven customers that came in to tell him goodbye by shaking his hand because they were getting ready to pass on. Those special few were good customers, and Holmes bought and sold guns with them. “They like coming in and talking,” he said.

Holmes has noticed the increase in sales of his guns and ammo when there are national tragedies like 9-11 and the Sandy Hook Elementary School shooting. Anti-gun presidents also cause his sales to go up. “It’s the uneasiness of the current affairs at the time that cause people to buy guns and ammo,” he said.

His outlet has taught him a key lesson. He has seen this lesson act out in the downward economy, and by customers buying something just to prove a point. One elderly customer bought a Confederate flag not for what the flag stands for, but because the U.S. government decided on its own what U.S. citizens can and cannot buy. “People have lost confidence in their government,” Holmes said. “You can’t tell an American no.”

Citizens from countries like Japan, South Africa and the Czech Republic have been to the outlet while visiting the PASA Park in Barry. Holmes said the customers from Japan were particularly impressed with the outlet. There have also been many hunters who come to the outlet consistently from various states.

When Holmes first opened his outlet there were a lot more military surplus businesses around. He knows of one other military surplus business in the area located in Springfield called Birds ‘n Brooks. Holmes said the U.S. government no longer sales used military surplus like it used to, it is now destroyed so the wrong hands don’t get a hold of it. However any new military product can be purchased. Holmes credits the uniqueness of his outlet for why it is still around today. “Hats off to the store,” he said.

Holmes first decided to open the outlet after not being able to find work. He had been a field engineer, and helped to build the levies in Meredosia. He remembered him and his friends walking around two miles to an army, navy surplus store while growing-up in Phoenix, AZ. Holmes has also always enjoyed hunting and fishing. He rented for a year then bought the building. “It was the only available building that would fit my needs at the time,” he said. The outlet is open Monday-Friday from 7 a.m. to 5 p.m., Saturday 7 a.m. to 3:30 p.m. and Sunday 7 a.m. to noon.

Holmes is originally from Jacksonville. He graduated from Jacksonville High School in 1968. Holmes and his wife, Irma, have been married 47 years. All three of their daughters worked for the outlet while growing-up. Their daughters are Hansell, who continues to work with her dad, Diana Tone and Dixie Freehill.