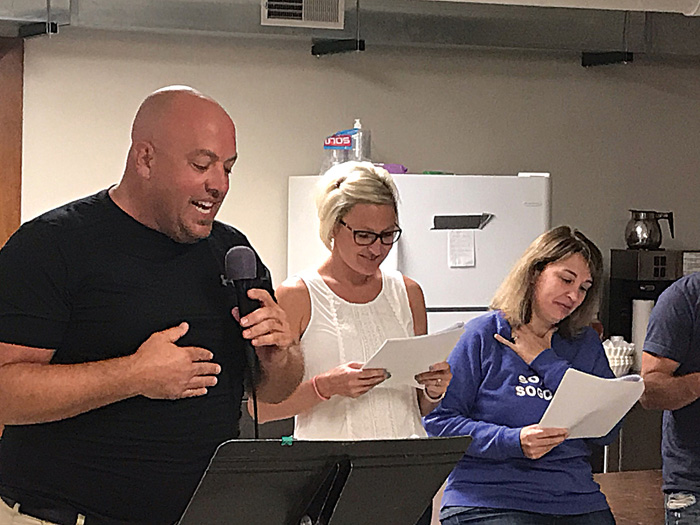 “Don’t ever underestimate the impact that you may have on someone else’s life.”
~ Anonymous

In 35 years of serving as the drama and speech teacher at Triopia Junior-Senior High School (THS), Ken Bradbury (KB) impacted the lives of thousands of students, co-workers, many area actresses, actors, musicians, and countless audiences. Through the efforts of several THS alumni and friends, you have the opportunity to experience a nostalgic look back at the musical highlights from many of the original Triopia productions.

“The Ken Bradbury Music Extravaganza” will be presented Saturday September 28 at 2:30 p.m. and at 7 p.m. at Triopia Grade School gym, located on the Concord-Arenzville Road. Tickets are general admission and are $10 each. They can be purchased at The First National Bank of Arenzville, 1839 W. Morton. Jacksonville or 110 South Charles St. in Arenzville. Tickets are also available at CNB Bank & Trust at 510 S. Superior in Chapin. Tickets will be available at the door prior to both performances. All proceeds will go to support the work of The Ken Bradbury Foundation.

Every cast member has a story to tell of the individual impact Mr. Bradbury had on their lives. “As I look at who I am today, either as a dad, a husband, a manager at work, a board member, and even a farmer … so many things I do or say, I learned from being mentored by Ken Bradbury,” recalled Luke Crawford, class of 1998. “I will forever be grateful God allowed me to walk in his shadow for a bit while he was here on earth.” Jerry Hooker, class of 1981, shared his thoughts on the Bradbury impact. “First of all, I am grateful to be asked to be a part of this tribute. Before I became a judge, I was a trial attorney. My ability to stand in front of a jury and argue a case I learned from KB. He taught me to be an effective speaker.”

The show will feature songs from a selection of musicals that Bradbury wrote and directed while at Triopia. Chuck West, who assisted Bradbury over the years, played an instrumental role in determining the correct songs to fit the cast assembled for this production. The 15-member all-Triopia alumni cast will bring musical highlights from such memorable shows as “Prodigal,” “Booley,” “Children of the Rainbow,” “Captain Jack,” and “Viva Ester,” as well as others. The production’s musical highlights span shows from 1981 through 2006. “If you enjoyed the original musicals, then don’t miss this opportunity to hear some of your favorite songs performed by many of the original cast members,” remarked Steve Eisenhower, former Triopia superintendent and a part of the production team for this special show.

Becky Smith McCartney, class of 1986, will be a part of the cast. “High school productions at Triopia were like no other, literally. There was an energy in the building for six weeks,” reminisced McCartney. “Grades improved, new friendships were formed, and KB was at the heart of it. We loved him. To be candid, we all feared him, too. His expectations exceeded our own because he knew what we were capable of and he got it out of us.”

Serving as musical director for this tribute is THS alum John Love. “Had I not had Ken in my life, I wouldn’t have minored in theater or had the confidence to pursue a job in the entertainment world. My entire life and career is based entirely on Ken encouraging me to trust myself. Without him, I would not be the man I am today,” concluded Love. Rounding out those involved are alums Jeff Westerfield and Bruce Surratt as the narrators; Troy Fezler, Caleb Holloway, Jerry Kirbach, Jill Roegge and Chuck West as the musicians; Eisenhower, Jamie Hobrock, Maryjane Million and West as the production team; Dave Mason, providing sound mix; and Steve Tankersley, providing lighting design.

The production team would like to thank everyone for their involvement in making “The Ken Bradbury Music Extravaganza” possible. They recognize Chapin Fire Department for supervising the parking at the school; Triopia National Honor Society for providing general assistance; Laurie Mattes, the head cook for Triopia, for providing the meal for the cast and crew; and Triopia CUSD #27 Board of Education and Administrators for the use of the facilities.