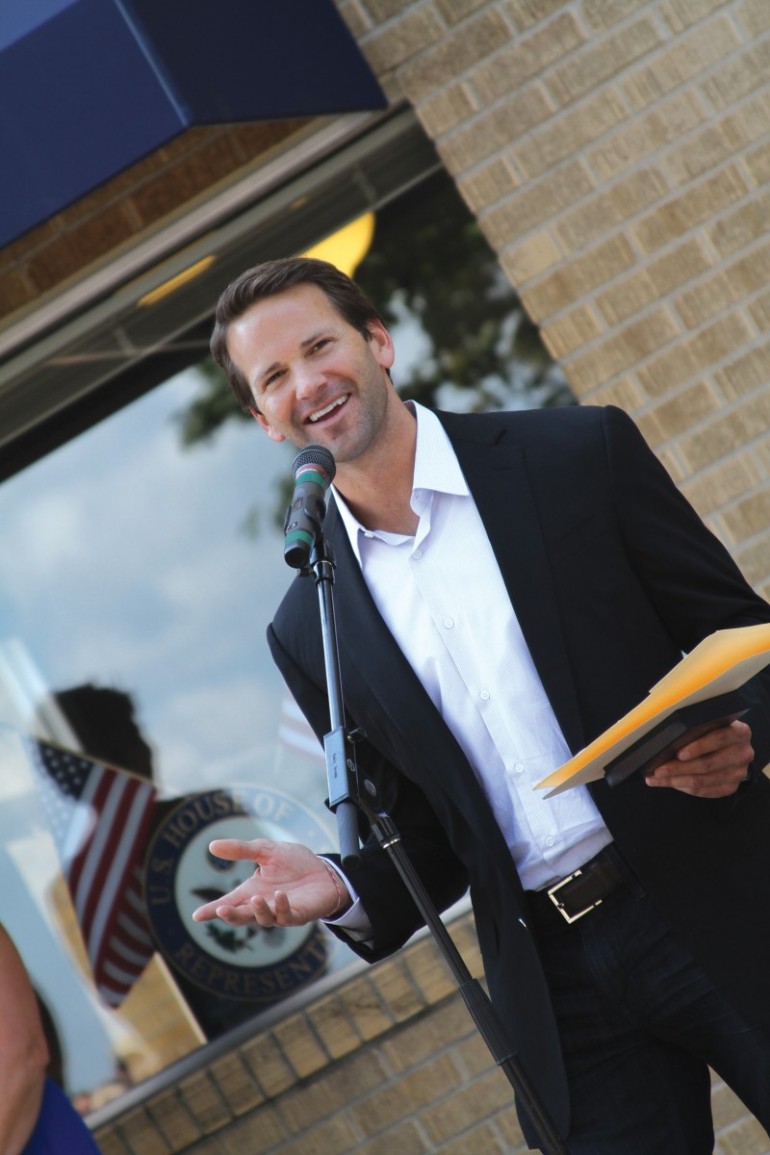 “The constant questions over the last six weeks have proven a great distraction that has made it too difficult for me to serve the people of the 18th District with the high standards that they deserve and which I have set for myself.”
The statement and subsequent resignation—effective March 31—
by Congressman Aaron Schock (R.-Peoria, IL) has come as a surprise to many.

The first Representative to be born in the 1980s, the 33-year-old Schock was once thought to be a rising star in Republican circles. Known for his affability, tech savvy, sartorial inclinations and Men’s Health cover, Schock’s persona was seen a fresh face whose Generation Y perspective could help balance out the stodgy aura of the Republican Party. Through his deft use of social media he has cultivated a cult-like following, amassing more than eighteen-thousand Instagram fans. His account shows him hobnobbing with a diverse range of famous personalities from Apple CEO Tim Cook to the pope, all while globetrotting to exotic, and as a result expensive, locales.
Schock leveraged this quasi-celebrity status to become one of the more successful fundraisers in Congress. In 2014, his GOP Generation Y Fund PAC contributed $468,588 to Republican candidates. For perspective, the amount raised was fourteenth most overall. More than both Senate Majority Leader Mitch McConnell and John McCain were able to raise for their respective PACs. In politics, where fundraising is an elected official’s lifeblood, this was not lost on political insiders. While Schock’s political capital was towards the lower end of the spectrum, having never sponsored a single bill that became law, his ability to raise money for himself and his party was a valuable asset. And it is not as if he had zero sway in the halls of the Capitol Building; he had just landed a prominent position as a member of the House Ways and Means Committee.
So what brought down the Representative as quickly as his rise? It turns out that his love for “Downton Abbey” may be the reason for his political downfall.
“Bright red walls. A gold-colored sconce with black candles. A Federal-style bull’s-eye mirror with an eagle perched on top. And this is just the Illinois Republican’s outer office,” writes Ben Terris, a Washington Post reporter, describing Schock’s Capitol Hill digs.
Terris is informed that “it’s actually based off of the red room in ‘Downton Abbey.’” He was then escorted through the rest of the office by Annie Brahler, the interior decorator who was hired to spruce up the place. A seemingly innocuous piece on the Representative turned intriguing when Terris’s walkthrough was interrupted by a phone call from Rep. Schock’s communications director Benjamin Cole. Mr. Cole proceeded to ask that Terris stop taking pictures and to delete those he had already snapped. He went on to inform Terris that he had “…created a bit of a crisis in the office” and then proceeded with an attempt to dissuade the journalist from writing about the ornate workplace:
“You’ve got a member [of Congress] willing to talk to you about other things. Why sour it by rushing to write some gossipy piece?”
The defensive attitude of Mr. Cole and his use of the word “crisis” naturally piqued Terris’s interest. What could have been a forgettable “gossipy piece” turned into a serious investigation when POLITICO began to report on his spending habits in which “[he] spent more than $90,000 in campaign dollars on private air charters, an unusually high sum for a rank-and-file member of the House.” It also turns out that even though Ms. Brahler decorated Schock’s office pro bono, it is considered unethical by The House Ethics Manual to accept gifts from a single source for over $100 per year, including any service with which can be attached monetary value.
Things began to snowball as new stories of alleged wrongdoing would begin to emerge throughout February and up to his March 17 resignation date. Subsequent reporting discovered a pattern of bountiful spending and lackadaisical recording keeping. From undisclosed dinners in London to using taxpayer money (reported 2/26) to flying from Peoria to Chicago for a Bears game and misreporting it as a software expenditure (reported 3/9). As new details continued to emerge, Schock attempted to allay party member concerns. In a Republican Party closed meeting on March 3, Representative Schock declared that his ability to raise funds for the party had not suffered as a result of the recent allegations, going on to state that he had raised half a million dollars for the National Republican Congressional Committee in the past few months.
This was not enough. On March 16, POLITICO raised the issue of the Congressman’s mileage reimbursements that he received for his personal vehicle. It turns out that Rep. Schock billed the federal government (i.e. taxpayers) for 170,000 miles dating from January 2010 to July 2014. This is normal. What is abnormal is the fact that a POLITICO investigation revealed the fact that when Schock sold the automobile that July 2014, it only had 80,000 miles on it. When asked to comment, the Representative’s office declined. The next day, Rep. Aaron Schock released a statement announcing his resignation from office.
A Schock spokesman went on to state that, “In an effort to remove any questions and out of abundance of caution, Congressman Schock has reimbursed all monies received for official mileage since his election to Congress.” His Instagram account is now set to private, presumably as a result of the ethics investigation he is currently facing. An investigation, it is of note, that will terminate once he has officially left office. Whether or not there will be a criminal investigation is another matter.
Aaron Schock is a man who has risen quickly to the upper levels of United States politics. His ambition has never been a secret. He has been on the political radar ever since he cunningly finagled his way on to the Peoria school board, becoming its youngest member. His ambition was matched by his political prowess. He became the youngest Illinois state legislator as well as one of the youngest members of Congress. Few would doubt that he wanted to become the youngest US President. He holds the dubious distinction of becoming youngest US Representative to have resigned during a term. Schock’s accelerated rise has been accompanied by a meteoric crash. With Congressional approval and trust ratings hovering near all-time lows, some people might not find this story too shocking.