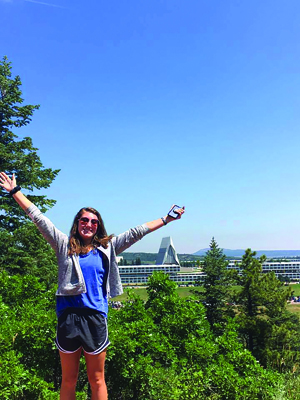 Abigail McCue did not think she would go into the military until astronaut Scott Kelly spent almost one year at the International Space Station.

McCue began looking at colleges that astronauts have graduated from and found the United States Air Force Academy. For McCue, attending the Air Force Academy is not a destination; it’s a step towards her dream of being an astronaut.

McCue grew up and attended school in Waverly. She took every art class that she could and played volleyball; then she started track. When a coach wanted them to try pole vaulting, everyone at the school was scared, McCue walked over to figure out how to do it. “It’s probably the closest thing you can get to flying and not be in an airplane. So, that was kinda fun and nobody else wanted to do it.”

She spent time at the airport in Palmyra and dreamed of flying. McCue said, “I wanted to get my pilot’s license before I even thought about applying to the Air Force Academy.” She flew 10 hours but didn’t finish getting her pilot’s license.

McCue began her application for the Air Force Academy in her junior year of high school. She applied for the academy’s summer seminar but didn’t get to go. In 2019, she toured the academy with her parents. She loved the campus and buildings, saying, “I had already researched all the academics and opportunities. That was what lead me to it.” McCue added, “I like the state of Colorado, I found out.”

When the application process opened, McCue filled out questionnaires, wrote essays and sent transcripts. She also had to pass a medical exam and optical exam since she wears glasses. “You could get kicked out at a few different places.” She said. Then she applied for nominations from her senators and representative. Compiling her paperwork, she sealed it in an envelope and sent it off to her representative. McCue bought a suit and drove to Peoria to interview. McCue didn’t meet Representative Darin Lahood, she was interviewed by his panel of multiple men from military backgrounds for academy nominations. They all asked McCue questions, she tried to answer them one by one. They asked why she wanted to go to the Air Force Academy and why she didn’t apply to other military schools. “They really make sure that this is what you want to do,” McCue said. “They asked why I hadn’t applied to other military academies. I didn’t really know how to answer.”

McCue was surprised to receive a call from Lahood on March 7 after finishing the nomination process. Lahood told her that she had been accepted into the United States Air Force Academy. When he told her that she was in, McCue started crying. She laughed, “I tried to pull myself together to finish the call because I was talking to my Representative.” Lahood said, “It’s okay, it’s okay” when he heard her crying. McCue said, “I was happy for about a week. Then I was scared after that and I’m still scared now.” Three days later, she got her official paper from the academy.

McCue pushed through the rigorous application process, saying, “A lot of people would probably want to quit … It was a long process and if you have any kind of complication you can’t just quit.” Even though she was accepted into the academy McCue says, she’s afraid “that they were wrong and shouldn’t have accepted me.”

Over the next four years, when McCue is not in school, she will be in military training. She added, “I’ve lived at home forever and I feel like I’m not a kid anymore. I feel like it’s not even my house anymore, it’s my parents’ house and that’s pretty scary.”

McCue hopes to go to pilot school after graduating with her degree in Astronautical Engineering from the Air Force Academy. She said, “Flying is just fun … It makes you feel really small. You see the whole world, you’re just one person in it.” But McCue’s dream doesn’t end with being a pilot, she wants to be an astronaut.