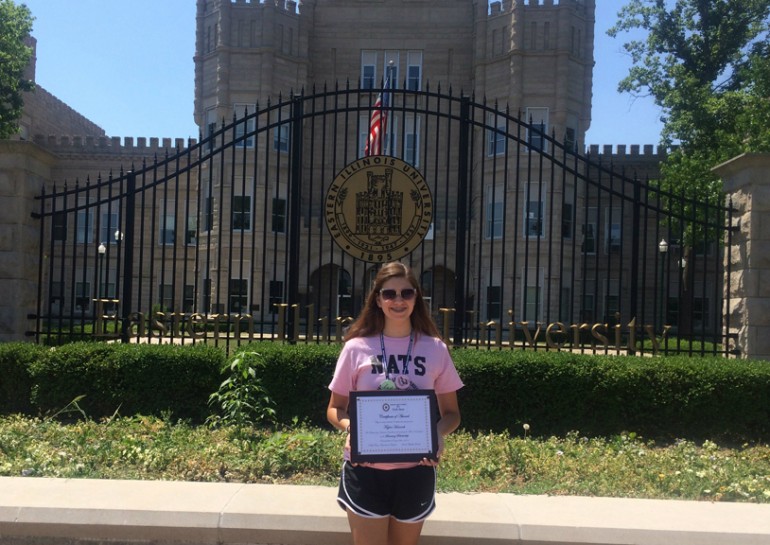 Taylor Hancock of Arenzville, Illinois, was named the female Illinois nominee for the Samsung American Legion Scholarship. Her application will compete with 99 others from across the nation for a $20,000 scholarship.

The scholarship was created by Samsung to show its appreciation for U.S. veterans who came to Korea’s aid during its struggle against communist forces during the Korean War. This scholarship is only available to students who have attended American Legion Auxiliary Boys or Girls State for the week, and who are direct descendants of U.S. veterans that had served during a specified time. Scholarship winners are selected based on academic record, involvement in school and community activities, community service and financial need. 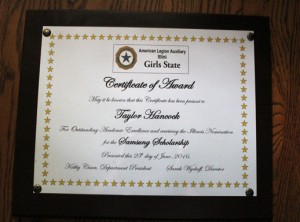 Taylor recently attended the 76th session of American Legion Auxiliary Illini Girls State, where she was a judge of elections. She was also eligible for the scholarship through her grandfather, Milton Carls, who had served in the United States Air Force during the Korean War. Her application was chosen to continue on in the competition over the applications of possibly over 400 other girls who attended the week-long camp.

She was sponsored to go by the Arenzville American Legion Auxiliary. This unit was established in 1949 and has been sending girls to Illini Girls State since 1950. Each year, they are able to send up to five girls to the camp. This year, they sent Taylor Hancock and Abbie Link. Both girls will be seniors at Triopia High School this fall. 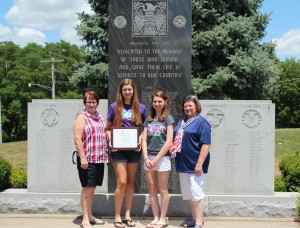 The camp teaches upcoming seniors in high school about city, county and state government. Officials were elected or appointed by the girls at the camp for each level of government. They had two to three assemblies each day. Throughout the week, there were guest speakers such as State Treasurer Michael Frerichs and State Representative Norine Hammond. Their days were busy, with early mornings and late nights. Along with learning about leadership, many girls also find friendship during the camp. The camp provides great experiences and memories for everyone involved.