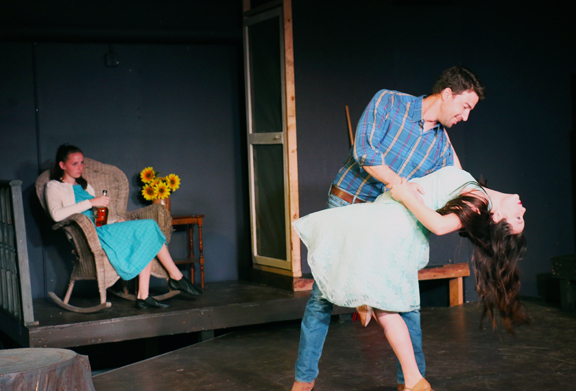 August is brimming with a wide variety of theatrical events to take your mind off the heat and humidity, here in Jacksonville! Continuing this weekend at Playhouse On The Square is the William Inge classic play PICNIC, directed by Kim Shafer. The play takes place on Labor day Weekend during the 1950’s, in the joint backyards of two middle-aged widows: “Flo Owens” (Becky Lawson), who lives there with her two daughters, “Madge” (Hannah Hogan) and “Millie” (Carolyn Wood), and a boarder who is a spinster school teacher (Sherri Mitchell). The other house belongs to “Helen Potts” (Laurie McCoy), who lives with her elderly and invalid mother. A young and attractive (and often shirtless) young man named “Hal” (Roy Pyers), comes to town. His animal vitality seriously upsets the entire group and soon the bootleg whiskey is flowing, dancing ensues and hearts are broken. Others in the cast are: Joey Lawson, Brandon Coniglio, Marilyn Webster, Lynette Cervi, and Mike Schneider. This talented cast includes one person making their stage debut, some are making their Playhouse On The Square debut, and several are familiar faces at both theatres in town and in the area. Kim tells me that they have really connected with their roles and with each other and she truly looks forward to bringing this Pulitzer Prize winning American play to the Jacksonville Community. Just as a bit of trivia, the original production of this play on Broadway was Paul Newman’s Broadway debut. He later went on to take over the lead role of “Hal”. The film version starred William Holden, Kim Novak, and Rosalind Russell. Performances continue Friday and Saturday at 7:30 pm and Sunday at 2. Tickets are available at Our Town Books or The Soap Co. Coffee House or by making a reservation at 217-491-3977.

Jacksonville Theatre Guild is bringing the new play, LEAVING IOWA (by Tim Clue and Spike Manton) to their studio theatre. This is the story of Don Browning, a writer, who returns home and decides to finally take his father’s ashes to his childhood home, as requested. But when Don discovers that Grandma’s house is now a grocery store, he begins traveling across Iowa searching for a proper resting place for his father. This father-and-son road trip shifts smoothly from the present to Don’s memories of the annual, torturous vacations of his childhood. Don’s journey leads him to reconcile his past and present at the center of the United States. This funny and heartwarming comedy is directed by Sean VanAusdall-Rose The cast includes: Drew Stroud as “Don Browning”, John Steckel as “Dad”, Barb Gatlin as “Mom”, Carly Holmes as “Sis”, Darin Gehrke as “Multiple Character Guy”, and Katie McDannald as “Multiple Character Gal”. The show runs Aug 7, 8, 14, and 15 at 7:30 pm and Aug 9 & 16 at 2. Call 245-1402 for tickets or order on-line at jaxtg.weebly.com (NOTE: WHEN YOU ORDER TICKETS ON-LINE, THEY WILL BE HELD FOR YOU AT THE DOOR ON THE DATE THAT YOU SELECTED)

Closing out the summer, Playhouse On The Square is producing the play, GOOD PEOPLE, by David Lindsay-Abaire. When it made its Broadway debut, the critics raved: “David Lindsay-Abaire pays his respects to his old South Boston neighborhood with this tough and tender play about the insurmountable class divide between those who make it out of this blue-collar Irish neighborhood and those who find themselves left behind. The scrappy characters have tremendous appeal, and the moral dilemma they grapple with—is it strength of character or just a few lucky breaks that determines a person’s fate?—holds special significance in today’s harsh economic climate.” Directed by John Woodruff, the cast includes: Tyler Gillson, Amanda Hoffman, Shirene Thomas, Nick Snyder, and Katie Steinhouer. Performances are August 20, 21, and 22 at 7:30 and August 23 at 2. As always, tickets are available at Our Town Books or The Soap Co. Coffee House or by making a reservation at 217-491-3977.