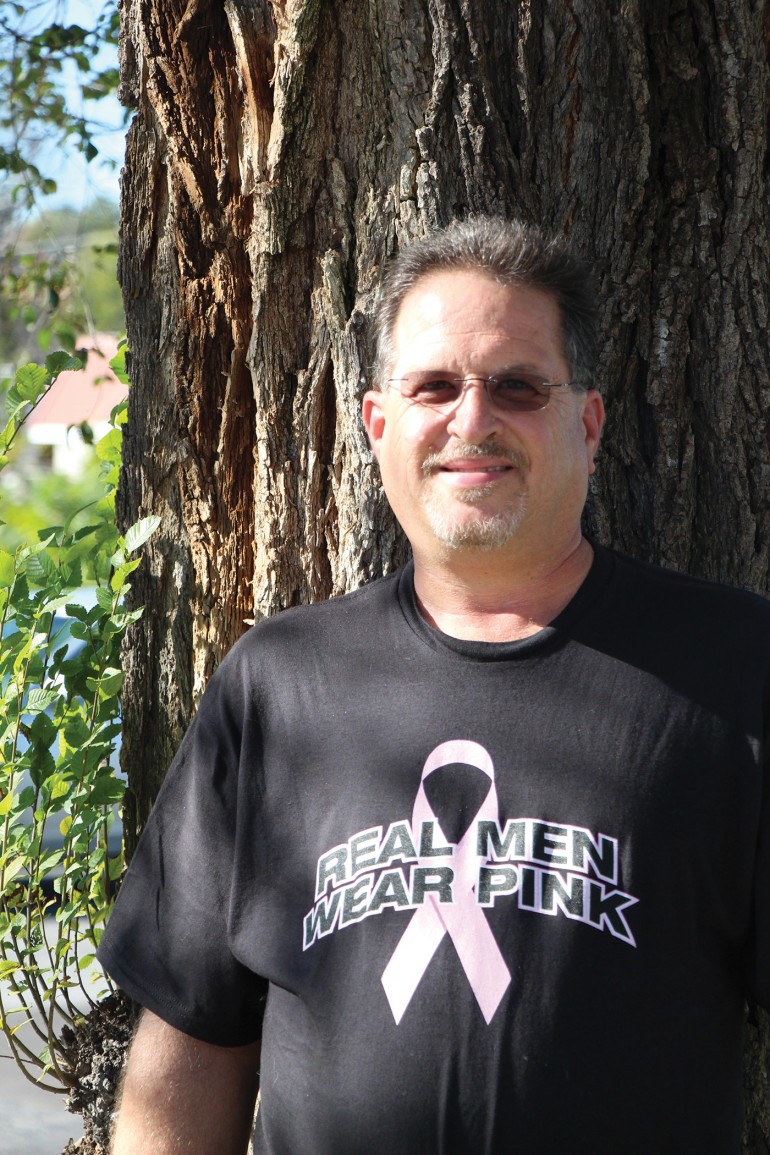 Believe it or not, there are those who seem to think that breast cancer is something that only women deal with, although research shows three percent of breast cancer occurs in men. Jacksonville native Steve Whitton is part of that small percentage; he was diagnosed with breast cancer 10 years ago, in August of 2004. He had noticed a lump around his right nipple and as soon as he felt it, Whitton says he knew it would probably be cancer; he had also lost a sister to breast cancer – “It was deep in my mind that that is what it was.” However, it took Whitton an entire month to say something about his lump to his wife. As soon as he did, he had a doctor’s appointment the very next day, which led to a consultation with the head of The Breast Center in Springfield the following day. Surgeons did screenings and testing and diagnosed Whitton with stage 3 breast cancer, specifically Invasive Ductal Carcinoma. He endured 6 or 7 rounds of chemotherapy, being given what patients refer to as “red devil,” or Adriamycin, for treatment. After it was explained that the size of the tumor was too large to treat with only chemotherapy, Whitton opted near the end of the 2004 holiday season to have a radical mastectomy on the right side. For those not familiar with exactly what a radical mastectomy entails, www.breastcancer.org defines it as “the most extensive type of mastectomy,” when the surgeon removes the entire breast, most or all of the underarm lymph nodes are removed and the “surgeon also removes the chest wall muscles under the breast.”

Whitton had actually been diagnosed very close to the time when Mia Ware passed from her five year battle with breast cancer. Actually, on the day that he was diagnosed, he ran into Mia Ware’s husband, Brad, who became a mentor to Whitton and encouraged him to join the Board of the Mia Ware Foundation. “I was thankful for what the doctors had been able to do to keep me here a little bit longer, and so I wanted to give back to society anything I could to help others who are facing the battle,” says Whitton of joining the Board. Back in 2004, there was very little research about men and breast cancer. After his radical mastectomy, he began chemotherapy and radiation again as further treatment in 2005, even receiving severe burns from the radiation at that time. Whitton was prescribed an estrogen-based drug commonly used for breast cancer (independent of the patient’s sex) called Tamoxifen. He continued with checkups, the time between them growing until five years had passed and Whitton was considered “cancer free.”

“So, I went nine and a half years cancer free…and it came back,” told Whitton. In March of 2014, Whitton was diagnosed with breast cancer that had spread to his lung; it had metastasized and could show up anywhere in his body now. Doctors found a tumor around his right lung and spots on his bones, and also confirmed mid-September that his T1 vertebra has cancer. So far, Whitton has been through more radiation and a change in oral medications and currently has no pain or symptoms for the cancer on his vertebra. He and his wife are happy with his Oncologist Krishna Rao, MD, PhD, who worked alongside him during his 2004 diagnosis. “You want to be comfortable with your doctors,” says Whitton. The aforementioned Breast Center where Rao works has been renamed to Simmons Cancer Institute and Rao has researched with Whitton, as well, in efforts to learn more specifically about men and breast cancer. With the push of Whitton and others, female-based breast cancer literature was even changing to represent males. He also volunteered with a mentor program called WISER (Women In Support of Each other’s Recovery) that matched breast cancer survivors with newly diagnosed breast cancer patients, supporting a few females and also a male as each went through his or her own battle. Whitton updates that a combination of a biopsy, radiation and oral meds has continued to shrink the cancer around his lung. Working daily, he is keeping positive and fiercely fighting his breast cancer; Whitton joked that all of his doctors keep asking him if he’s napping. They are flabbergasted that he is doing the things he’s doing: climbing ladders, getting on roofs, or days of lawn and yard work in the heat of summer – it’s a wonderful sign that he is capable of continuing with work.

Whitton tells his story in hopes that men will comprehend that it is possible the diagnosis of breast cancer in males. “Roughly three percent of all breast cancer diagnosis during the year would be male breast cancer…I just read that 2100 diagnoses in 2014 would be in males,” noted Whitton. As new drugs come out to help with breast cancer, Whitton expresses that “it’s going to be a big thing. If these [drugs] are something new, then it’s going to give other people hope, and for everybody that can hang on, it may be something that will keep them here with their families.” “Part of my goal is to try to help to educate people and [tell them to] get your early treatments. It may not be the cure, but each day that you can be here gives an opportunity for something else to come along.” In this month of October when people wear pink the last Friday of the week, “people may start to get tired of seeing everything pink. But, I still feel that the pink is an awareness that makes people think about breast cancer. You know, it may annoy some people, but let it annoy them. Let’s keep it out there,” encourages Whitton. With awareness of male breast cancer, there are still people out there that don’t have a clue – a man ridiculed Whitton for a patch of pink in his hair, laughing in disbelief when Whitton informed him that males could get breast cancer. “It needs to get out there,” expresses Whitton, pushing for programming to be directed to males, as well as females. Men should know their bodies, just as a female should. “With breast cancer, if you feel lumps, if there’s drainage from the nipple area, a changing in colors or anything like that where there is a change there, don’t put it off. The earlier you can find what it is if it is cancer, the better your odds are going to be at surviving. And with males, it’s normally gone to a more advanced stage by the time males are diagnosed. I think back when I was diagnosed, they told me that my chance of making it two years was higher than making it to five years. I beat the odds then, and I want to beat them now. I don’t give up. For any type of cancer, you’ve got to have a positive outlook and be here for another day. Don’t just give up.” Simply because a man might not have what is perceived as technical, formed breasts that one can see, please remember that breast cancer does, in fact, occur in men. Steve Whitton is a real man who wears pink.