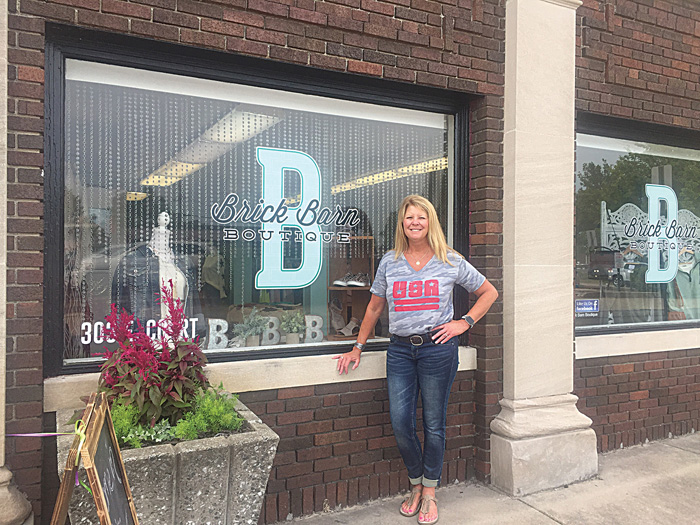 One weekend about a year ago, Jordan York suggested to her mother-in-law that they should open a boutique. Within just a few days, the pair was off to Chicago to start buying merchandise … and voila, Brick Barn Boutique was born.

On August 6, Brick Barn Boutique officially opened at their new location at 303 East Court St. in Jacksonville. Prior to moving the store to Jacksonville, Kellie York and her daughter-in-law, Jordan York, ran the boutique from a family barn they had renovated into a hunting cabin in Eldred. Kellie York stated that due to the limited traffic through Eldred, as well as the severe flooding this spring, they decided it was time to take the next step to grow their business … they needed to relocate.

Kellie York, who has an associate degree in fashion merchandising, did not have an opportunity to use her degree in a work setting until the opening of the Brick Barn Boutique. She stated that after she got married, she was a stay-at-home mom and helped on the family farm. Between the time since she earned her degree and opening the boutique, fashion and media has changed. Having Jordan York as the other part of the duo helps with that. Jordan York, a stay-at-home mother of two daughters, brings her skills with marketing and social media to the team. She also brings a younger perspective when it comes to fashion. Together, Kellie and Jordan York make a well-rounded pair of business owners who have strengths in different areas and are willing to compromise and blend their two styles.

Brick Barn Boutique carries women’s clothing and shoes. They currently have some children’s items, but are in the process of phasing out children’s clothes; Kellie York hopes to return to that market again in the future. Most of Brick Barn Boutique’s merchandise is more casual in nature, which she stated is more her personal style, as well. They have begun carrying styles for different body types, including a selection for the generally underserved population of “curvy” ladies with a new line called Grace.

Customers are welcomed into a store that looks like a well-put together Pinterest board. Everything is neatly organized, making shopping easier for customers. The two are even utilizing the old bank vault as a dressing room. Kellie York stated that she loves wearing the clothes from the boutique, and on opening day, she even sold a shirt off her own back because a customer loved the style and they were out of the size the customer needed.