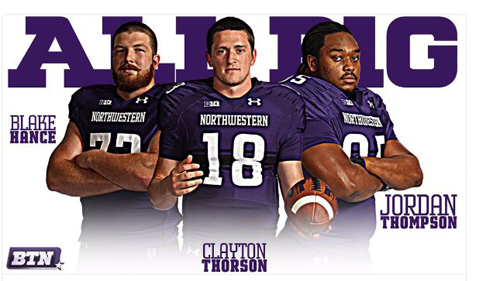 It’s seemingly impossible to miss Blake Hance. Standing six feet, six inches tall and weighing in at a lean 295 lbs., there aren’t many places for Hance to hide, which is fine, because that’s the way it’s been since elementary school. I still remember my younger brother playing against him in basketball as nine and ten year-olds and thinking, “Well this isn’t fair,” after Hance would dominate other 3rd graders the way Wilt Chamberlain dominated Caucasian comb-overs in the 1960s. You would’ve thought Hance might have just hit an early growth spurt and eventually stop growing. Nope. Hance grew taller and stronger and, more importantly, his hand-eye coordination and agility grew with him.

By the time he entered his freshman year at Jacksonville High School, Hance, a three-sport athlete, was already earning varsity minutes in both football and basketball. On the Crimsons’ football team, his combination size and athleticism made him a perfect fit for tight end, where he would go on to record 113 catches for 1,459 yards and 7 touchdowns during his varsity career – not to mention 104 tackles and 9.0 sacks as a defensive end. It didn’t take long for major division one programs to take notice of this, with top recruiting sites ranking Hance as the 13th highest prospect in Illinois and the No. 31 offensive line recruit in the country. Among his final choices was Vanderbilt, Mizzou and several Big Ten schools, including Northwestern University. Hance chose the purple and white of the Northwestern Wildcats.

“I think the (coaching) staff at Northwestern has been together longer than any staff in the country, as a whole,” Hance said of why he chose the Wildcats over the other programs. “Every single coach has been the same since I started getting recruited there, which is just unheard of in college football. I’ve heard my offensive line coach talk about how there’s just a million reasons not to leave there as a coach.”

The Wildcats’ head coach Pat Fitzgerald, a two-time National Defensive Player of the Year at Northwestern during the 1990s, was also a major reason why Hance chose Evanston, Ill., and also why he’s confident in the program’s future. “(Fitzgerald) is a really good coach’s coach and he’s a good player’s coach too. He’s always doing fun stuff with the team and he’s really hands-on,” Hance said of his head coach. “That was definitely a big reason why I went there is because I knew that (the coaches) would most likely be there the whole time I was there. I didn’t want to go somewhere and not know who my coach was going to be in two years.”

Hindsight being 20/20 as it always tends to be, it’s clear that Hance made the right decision. During his first year at NU, Hance chose to redshirt in order to prepare himself physically and mentally for the change not only from high school football to Big Ten football, but help him transition from tight end (his primary position in high school) to offensive line – not to mention allowing himself an extra year of eligibility. And Hance would be the first to admit that his year as a redshirt helped tremendously in terms of development. 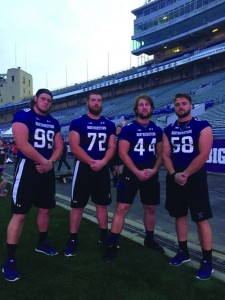 Former Jacksonville Crimson Blake Hance (No. 72) stands on Northwestern’s Ryan Field with his Wildcat teammates Ben Oxley (No. 99), James Prather (No. 44) and Heath Reineke (No. 58).

“It was definitely a big help because I basically had to start from square one, learning all the fundamentals and stuff, so that alone took most of the year,” Hance said of his year as a redshirt. “Probably the best thing about it was playing scout team, getting to go against our team defense in practice all year. That was a big help because I was going up against guys who were second team All-Big Ten and who’ll probably be playing in the (NFL) next year, and they were really good about telling me different things that I needed to get better at and improve upon.”

After finishing with a 5-7 record a year ago, when Hance was redshirting, the Wildcats now find themselves ranked 13th in the nation after an 11-2 regular season. Their second place finish in the Big Ten West has the Cats headed to Tampa, Florida for the Outback Bowl on New Year’s Day, where they’ll square off against the 23rd ranked Tennessee Volunteers. Of those 13 games, Hance saw substantial first-team reps in 10 of them, first in week two against Eastern Illinois after one of NU’s starting lineman went down with an injury. From there, Hance eventually earned a permanent starting role as the Wildcats’ left tackle.

During their week one win over Stanford – now ranked among the top ten teams in the country – Hance saw the field a number of times rotating in and out with other o-linemen. And the following week against Eastern Illinois, Hance got his first full-game experience when one of team’s starters went down with an injury during the Cats’ second possession. Two weeks later, after a different starting lineman suffered an injury against Ball State, Hance was called upon again to fill in. And while it appeared that the player he’d replaced would be sidelined for multiple weeks, Hance’s first official start came in week five against Minnesota, a game marking the commencement Northwestern’s Big Ten conference schedule.

“It’s a cool experience getting to play in the Big Ten and going up against some guys who will probably go to the NFL,” Hance said. “I’m excited for the next few years, we’ve got a lot of guys coming back, starting with the quarterback Clayton Thorson and running back Justin Jackson, who are both my age. It’s fun, (Jackson) makes it pretty easy to block for him, even if you leave one guy in the hole he usually doesn’t get him.”

Northwestern’s two losses this year came in back-to-back weeks against two perennially strong Big Ten teams in Michigan and Iowa. And while some of the previously injured linemen had returned for the Michigan game – leaving Hance sidelined for the entirety of the contest – the redshirt freshman found himself back in his starting role the following week against Iowa, a game that he readily admits that he’d like to have back. But while Hance considers Iowa to have been his worst game, his best performance came against the Cornhuskers of Nebraska.

“That was my first road start, and it was fun, (Nebraska) is a really cool place to play,” described Hance. “It was a pretty crazy environment and a really nice stadium, but their fans were nice people compared to some other places in the Big Ten – like in the game at Wisconsin when some of their fans were throwing snow balls at our players. But beating teams like Nebraska, that you grow up knowing they’re a traditional powerhouse, it’s a really cool feeling.”

Towards the end of our conversation, I felt obligated to ask the question that’s on seemingly everyone’s mind, especially those of us from Jacksonville: has he considered the possibility of playing football at the next level, and if so, how did he like his chances?

“That’s definitely the goal,” Hance said. “It’s a long way away but yeah, my goal is to at least attempt to keep playing, to hopefully get picked up by (an NFL team), and I think I have a pretty decent shot if I continue to learn and get better.”

Whether or not Hance does fulfill his dream of playing on Sundays will have to wait a few more years. But for now, the city of Jacksonville, and all of Hance’s former teammates and coaches should enjoy and be proud what he’s accomplished thus far – which, as of early December, includes being named to the Big Ten All-Freshman team. The next time to do so will be on January 1, 2016, during the nationally televised Outback Bowl in Tampa, Florida. Kickoff is scheduled for noon and will be aired on ESPN2. So while the people of Jacksonville bundles up for the January cold, Hance will be competing on the nation’s highest level in the warmth of The Sunshine State. Wherever you are that day, freezing or not, be sure to make you way to the nearest television set. Just look for No. 72 in purple and white. You can’t miss him.